Coalition of Resistance conference report back 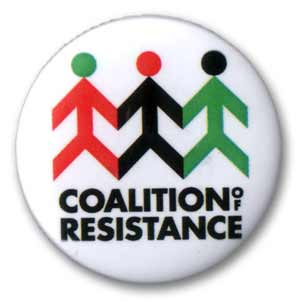 The government has been accused of taking a "wrecking ball" to the country by its cuts in public spending.
Len McCluskey, newly elected leader of the Unite union accused the government of going "far beyond" what was needed to rebalance the economy.
He told a conference in London organised by the Coalition of Resistance: "The anger that is unfurling across our country is not mindless.
"It is the legitimate expression of a people who feel that this government is taking a wrecking ball to our nation, going far beyond what is needed rebalance our books.
"They are using a global financial crisis to terrify the citizens of this country into meek acceptance of a raid on our schools, hospitals, services, jobs - the very fundamentals of our communities built up over 60 years of our tax and toil."

The Coalition of Resistance conference today was amazing. 1,300 delegates paid their £5. The British left set aside their usual bickering and agreed to launch a campaign of direct action to challenge the massive cuts coming from the Con-Dem neo-liberal regime.

From the SWP to the Climate Camp, groups sceptical of the Coalition have come on board.

There were some excellent speechs from the likes of Jeremy Corbyn, John McDonnell, Tony Benn and many others.

Many people worked hard to get the event off the ground, I am increasingly impressed by Green Party campaigns co-ordinator Romayne Phoenix, but hey I should mention another couple of hundred.

Good to see newly elected Unite General Secretary Len McCluskey quoting Engels and insisting that Britain's largest trade union is going to get stuck in. I am a Jerry Hicks loyalist to my marrow but Len did good.

I would urge everyone to get involved in the Coalition of Resistance and I will post videos as soon as I get them.

120 national committee were elected to take forward the resistance and the school students who took to the streets were loudly cheered on many occassions.
at November 27, 2010

Excellent! I wish I could have made it - have been recovering from a stinking cold.

hope you get better, lot of bad colds going around and I missed loads of things a couple of weeks back cos of cold.

Derek.
I must admit I dont think I have ever heard Jerry quote Engels. Must be something good happening in Unite.
When are you going to interview him?
Ian

It was Len McLusky not Jerry Hicks who quoted Engels, lot of good interview with Len on the web and yes I need to interview Jerry.

Any way some disagreement on the left about who to vote for as Unite General Secretary am I a great fan of Jerry Hicks but Len looks to be doing good, so good!

Cheers for the report, Derek. I am extremely buoyed by the events of the last few weeks. Makes all those years of thankless slogging worth it :D

I think we have a long way to go but yes Phil, it was a good event, I am sure there will be more detailed reports but a lot of the unity stuff from people who have disagreed in the past was very good.

Got to build it on the ground, 1,3000 registered was good, especially given all the occupations and other events going on today.

My good friend Hugo Blanco started as a school strike in the 1950s and went on to lead a revolution.

Good report, Derek. It gives a strong sense of the atmosphere and significance of the event. And it was good to finally meet you at the conference too!

Excellent to meet you Alex and lots of other good people,

Oh dear. I have a somewhat different take on it. E.g. if the organisers were serious about the workshops they would have had regional ones. They wouldn't have invited the appalling Colin Hampton from the TUC's poodle, the Unemployed Centre's Consultative Committee, to address the benefits/pensions workshop. They should have included an SP speaker and that to me is sectarianism and why 3 Counterfire speakers?

There was indeed sectarianism at work but behind the scenes. I suspect Derek it passed you by.

In Brighton there seems to have been one of the largest school students demonstrations, even the police estimated 3,000 (initially 1,000) and I would say it could have been as high as 5,000. Kids just streaming into the march.

Now one of the reasons it was successful was because the Trades Council initiated anti-cuts coalition was in constant contact with those who organised it to chivvy them, encourage them and reassure them when they feared it might not attract anyone. Together with the unemployed centre, whose minibus turned up with dozens of placards (which were scavenged within seconds!) the existing movement made contact with the new movement.

And who is the major political group in the Trades Council? Well it's not the SWP who tend to carp from the sidelines.