Next week's resistance to the catastophe machine 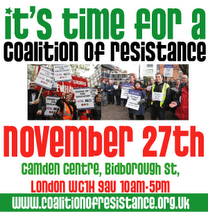 Busy week, I am speaking at a Brent Campaign Against Climate Change Meeting on tuesday, I am off to Downing Street
to demonstrate against education cuts on wednesday evening and I am speaking at the Coalition of Resistance conference
next saturday on a panel with James Meadway, Stathis Kouvelakis and Hilary Wainwright.

The subject as always of all this activity is the catastrophe machine.

It has several components. Climate change is being ignored, denied or used as a way to make bankers rich via carbon trading.

The global economy, based on capitalism, is ripping up the basic life support systems of our planet, inequality is accelerated causing economic crisis and, in turn, it rests on speculative forms of banking activity which are going to create more bailouts.

Greens are often not effective enough at stating this clearly and working for an alternative. The mounting chaos is in danger of fuelling a growth in far right politics. However from Aidesep's resistance in the Amazon to angry students in Britain, positive signs exist that positive change is possible.
at November 20, 2010