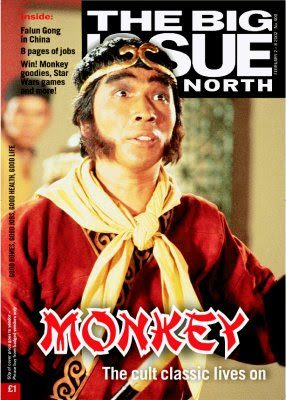 I can commend a two-page article in The Big Issue on privatisation of
CAB services by cost-cutting councils. The edition is 23 to 29 June, so
it would be a good idea to approach your nearest Big Issue seller for
one by Sunday 29 June. (I only picked up my copy today.)

The marketisation of debt advice services, etc that the article refers
to has also been applied to a 'quantity over quality' restructuring of
the way Shelter and other specialist advice services are ordered to work
by their management. The Green Party Trades Union Group has been active
in supporting trade union activity against such practices that are
ultimately designed more to satisfy fat cats than they are to
alleviating poverty.

I believe the kind of socialism New Labour practices is akin to that of
the late Robert Maxwell. He is reputed to have said, "I take people and
I squeeze them until the pips squeak."

Editor note: it isn't actually the Monkey edition of Big Issue in the North, I Doctor Wall of the Green Party of England and Wales thought this was a nice cover though.
at June 28, 2008