Demonstration for peace and justice in Gaza 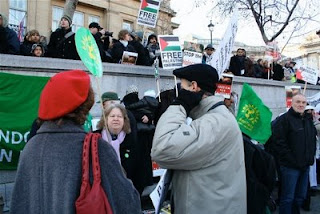 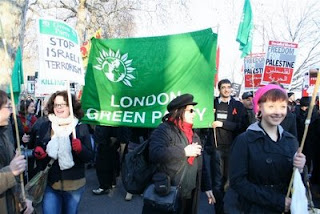 Despite the freezing cold I reckon at least 100,000 of us marched today for an end to the massacre in Gaza.

The demonstration was organised almost instantly by Stop the War coalition and Palestine Solidarity Campaign so to mobilise so many people was really impressive. I was struck, emotionally rather physically I might add, by a boy all of seven carrying a Jews for Justice for Palestine placard, by Muslims praying at the start of the march and above all by the way that usual suspect (like me) were diluted by so many others who don't usually march.

I eventually met up with my Green Party friends at the end including the ever dynamic Peter Tatchell. Peter joked that it was a demonstration where no one had hit him, he has been through many 'incidents', worst I think was when he was beaten on the gay pride march in Russia. He is so busy and I always tell him to do less and look after his health. I gave him a big hug, I sometimes disagree with him (not often) but he is utterly committed and never thinks of himself, too many people even in radical politics are influenced by career...never Peter, he is also one of the bravest people I know, from the Bermondsey by-election to Outrage to all his human rights work he has done so much.

Green Left members helped on the Green Party stall and I also spotted Steve Lambert who is married to Jean Lambert our wonderful London Green MEP. As Steve was in the distance I didn't get to chat to him, he has been very active in the party ever since it first started in London in the 1970s. Good to see Romayne, Payam, Mark, Farid, Tim Summers, Jonathon Essex and of course Mark from Sea Shephard (although he was not in this capacity today!), etc. Jean was on the demonstration as well.

Ran into my friend Zee who is a pretty keen Sufi muslim, we like to have a laugh and discuss theology. We witnessed the shoes thrown at Downing Street to make the point that Brown supports Bush and without the might of the US, Israel could not mount its fearsome attacks.

I get the impression (CORRECT ME IF I AM WRONG) that the organisers were not willing to have a Green Party speaker, I am not sure if this was actually the case but its a shame not to have heard from Jean or Caroline today.

Ran into my political advisor and his wife, I feel guilty because I never keep in touch properly by phone but I run into him at events, this has happened four or five times without any pre planning, once in Manchester, once on in Caracas, several times in London...so he was able to firm up some Cuba green politics work for me (more on this later). Its like something out of Gabrial Garcia Marquez, political magical realism and my friend comes from just down the coast from Gabbo.

The left groups with one exception were pretty thin on the ground, did think of buying Thomas Sankara speaks from the Pathfinder/Communist League people. Sankara was a prophetic figure, an ecosocialist and very great African leader, he was murdered of course. I am not convinced that the CL are quite as interesting, although they sell so good material.

The SWP like a giant machine were out selling merchandise and signing up new members. They are so organised but does it go any where, no it doesn't! They recruit people, most of them get pissed off because of the lack of internal democracy and then often drop out of politics altogether. I am impressed though by Richard Seymour, Lenin's Tomb his blog is a mine of information and I have read that he is part of the democracy movement in the SWP.

I regret not getting to talk to the Jewish Socialist Group people, other than Toby Abse via ecosocialist events and Goldsmiths, I know them all only via the net! It would have great to have met David Rosenberg, for example, whose stuff I have been posting up earlier today. Did see their banner in the distance.

Any way my personal musing should not disguise the fact that this was a big event, another comrade Sean Thompson suggested it was bigger than the protests he had been on against the Vietnam war. I didn't have a street fighting years decade in the 1960s with Mick Jagger and Tariq Ali cos I was a toddler, so could not judge the veracity of this claim.

Political carnival as it was, at least by mobilising so many people it witnessed that fact that so many of us are disgusted by the killing. Will it have an effect, well we need to broaden and deepen the protest and then may be.

The horrible truth is that a ground war could occur, a war which ultimately will weaken Israel and strengthen their opponents, the cost in dead kids will be horrendous.

My fear is the next step will be a ground war, this is a war that Israel cannot in my opinion win. Either they kill thousands and Hamas continues to fight them, a scenario which would be seen like the war in Lebanon as a victory for Israel's opponents or they crush Hamas totally (unlikely) and in doing so kill tens of thousands, breeding even more opposition.

Peace and justice are the only way forward.

Thanks Derek for a very vivid description of what was certainly a very vibrant demo - and sorry I didn't bump into you there though we continue to meet in cyberspace! No worries though, I suspect israel will give us the opportunity to meet in protest on another day.

I was there until about 3pm having marched in a very large Jewish contingent that included the Jewish Socialists Group (JSG), Jews for Justice for Palestinians, and Jews Against Zionism. I think our presence as a bloc was important to underline that this is not a religious conflict of Arabs/Muslims v Jews but a conflict between those on the side of peace and justice v those not.

I think your estimate of numbers was a little too high! But, there were certainly tens of thousands, all ages/ethnicities, and lots of people who I hadn't recognised from previous demos.

This evening there is a demonstration in Tel-Aviv of Israelis challenging their government's war policy.

The JSG gave out a leaflet at the demo today with our perspective. you can find this at:
http://www.jewishsocialist.org.uk/#leaflet