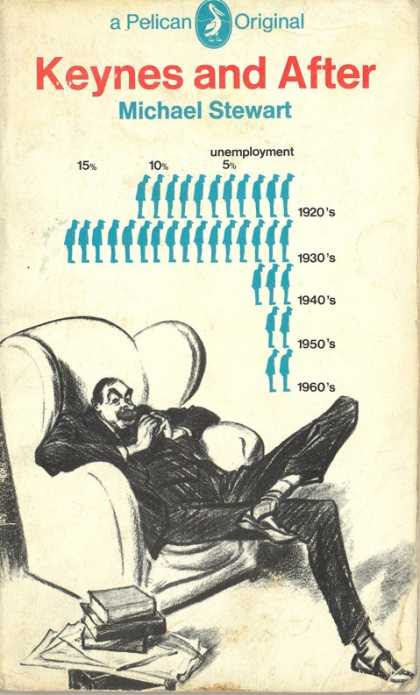 Infinite economic growth on a finate planet, Keynesian is still part of the problem not part of the solution...this is what Will says

As the world heads into deep recession, commodity prices are collapsing, hedge funds are forced into panic selling, Keynes is raised from the dead and weak currencies crumble. The world economy is dominated by de-leveraging and a flight to quality. From households to multi national companies, every borrower is struggling to cut levels of debt and find somewhere safe for their money.

Mr Keynes
In a spectacular change of tack, the Financial Times reports that J.M.Keynes, celebrated economist of social democracy, is back in fashion. Last week, Samuel Brittain, Thatcher’s moneatrist, wrote a column that started with a lengthy quote from Keynes. He went on to call for public works and increased state spending. This from a man who spent the 1980’s explaining why public money shouldn’t be used to save the pits or steel works. Its Ian Paisley kneeling on the steps of the Vatican.

Rediscovering the virtues of Keynes is an indication of the gravity of the economic crisis. The free market strategy behind the Raegan/Thatcher revolution has been abandoned – we are now in a new world. However, Keynes was never able to translate his solutions from national level to international action. And it was the 2nd World War rather than the adoption of Keynesian policies by President Roosevelt that led the world out of depression.

With the crisis of finance raging, the world again faces the breakdown of international economic relationships. In the 30’s this stemmed from the introduction of American tariffs to protect domestic industry. The trade war unleashed saw world exports fall by 2/3rds in 8 months. Similar tariffs may be avoided this time, but collapses in commodity prices, a halt to capital flows and political tension may damage the world economy just the same.

Commodities
Commodity prices have continues their dramatic fall. Copper, iron ore and oil have halved in price over the last few months. The cost per day of hiring the largest bulk container, typically used to ship iron ore from South America to China, has fallen from $220,000 to just $12,000. The fall in commodity prices reflects a sudden slowdown in demand as the collapse of the construction industry, retail and car sales feeds through to producers. These price falls have been exaggerated by the speculation of the hedge funds. They placed enormous bets on oil and commodity prices, chasing them ever higher. They have now bailed out en masse.

Hedge funds
The French finance ministry is among many who have pointed at hedge funds as a major destabilising influence in the world economy. They grew rapidly over the last 20 years – offering lucrative investment opportunities for the rich. Globalisation helped them escape central bank supervision, they avoided regulations that had been in place since the 1929 crash when it was widely believed that unlimited leverage had destroyed the market. Investors had used their shares as collateral to borrow from banks to buy more shares. They could then borrow again against the new shares. This allowed them to buy many times the shares that they could otherwise afford. The borrowing is called leverage. They made fortunes as the prices rose. This dangerous spiral acted the opposite way when prices fell – the investor had less collateral against which to borrow and had to sell to raise the cash to pay back some of the bank loans. Prices fell leading to further selling. An avalanche of selling swamped the market leading to bankruptcies.

Hedge funds now stand accused of playing this destabilising role – using leverage to drive prices of oil and commodities high followed by a desperate sell off. Hedge funds borrow their money from investment banks like Lehman Bros or Goldman Sachs. Lehman went bust last month. The other banks are loath or unable to lend. The hedge funds have been starved of funds. Their bets on rising oil and commodity prices have gone to pieces as world demand has fallen. They have become desperate forced sellers into a collapsing market


Iceland and Britain – sovereign hedge funds?
A few months ago the Financial Times ran a story on Iceland, sarcastically comparing it to a hedge fund. The writers argued that, like a hedge fund, Iceland had modest wealth of its own but had borrowed heavily, often for short term, and invested the money in various overseas enterprises – from House of Fraser to West Ham United. The article has proved far-sighted, Iceland’s economy has now collapsed. Faced with frozen banks and a collapsing currency, Icelanders now have to show air tickets as proof of travel to change Krona for hard currency. Their government only has 9 months of hard currency left and the money is fleeing fast.

A few days after the FT ran its sarcastic review of Iceland it ran a second article making the same case against the British economy. If Iceland could be compared to a hedge fund – then surely Britain could as well. Again, a modestly sized economy producing few goods essential to the rest of the world had become dominated by a grossly swollen banking sector that had burdened the country with enormous debt. Much of the debt had been used to build hedge funds and invest in sectors like mining that boomed during the expansion of the 80’s but now face bleak times. Shares of the giant mining houses like Rio Tinto Zinc and BHP have fallen by 70% as prices of iron ore, copper and coal have collapsed. Unlike Iceland, the UK economy has yet to collapse like the hedge fund that the FT suggested it resembled. But whether Stirling can remain as strong as the Euro, dollar and Swiss franc is another matter.

Currency problems
Around the world attention has now focused on currencies. The banking sectors of the major industrial countries have been underwritten by their domestic governments. Private risk has been substituted by public risk. Areas of the world that have expanded massively in recent years using borrowed money are particularly vulnerable. Massive volumes of foreign money have poured into Central and Eastern Europe chasing the rapidly growing economies. Large commodity exporters such as Brazil and Russia have also received enormous foreign investment and borrowed against their resources. The banks are desperate to cut risky lending. With grain and metal prices falling by half and demand levels threatened by recession, no one wants to lend money to dig mines or by future wheat crops.

Oleg Deripaska is woth $28 billion on paper. Russia’s richest man owns the world’s largest nickel mines and has borrowed $4 billion from a group of western banks to build his business empire. The nickel price has now collapsed. The terms of the deal means Deripaska has to pay the banks back $1 billion dollars by the end of October or they get ¼ of the nickel mines. He hasn’t got the cash. The Russian stock market has fallen 70% in a months. So Deripaska has to either sell a huge number of shares into a chaotic market or Western banks get a big strategic stake in Russia’s nickel industry. Or the Russian government seizes the mines.

Around the world international tensions are emerging from the crisis. The EU has bailed out Hungary where the florint is falling, can it bail out the Ukraine as well? The cost of insuring government debt has risen viscously for countries at risk. Pakistan, mired in political chaos, is now considered 90% likely to be unable to make its bond repayments. China is offering loans in a politically controversial move. Meanwhile, the guru of American investors, tycoon Warren Buffet, has announced that he has moved all his money into US stocks. While this may be partly a politically motivated expression of confidence in Uncle Sam, it also underlines the threat that, as in the 1930’s, a retreat to national perspectives provokes a catastrophic collapse of trade.

Back to Keynes?
National Keynesian initiatives may only have a limited effect in limiting recession if world trade collapses and weaker economies are sent to the wall. Keynes of course was a champion of world capitalism – he just believed government intervention was needed to save capitalism from itself. As Thatcher pointed out, the danger of Keynesian solutions is that they might mislead the workers into feeling that the economy could be organised for their benefit, that profits don’t matter. Mandelson’s attack on postal workers will remind British workers where the loyalties a Labour government spouting Keynes really lie. A global initiative that prioritises economic justice and the mobilisation of resources to build a sustainable economy is not currently on the agenda. Resurrecting J.M.Keynes will not be enough.