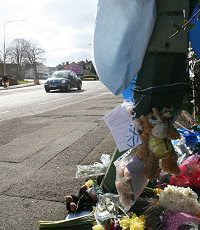 I blog on Andy Newman's Socialist Unity site, a few things have come up where I disagree with him (I think this is healthy), this is something though where I agree and is of obvious interest to greens, even those of a less red shade than yours truly.

speed kills.....
Swindon is in the national news today after the Tory council voted to stop funding speed cameras from next year. As a political activist in the same town I have a passing acquaintance with these Tory councillors, as individuals they are mainly sincere and well intentioned; and in a break from the Thatcher era they are really remarkably non-ideological - just reflecting what they see as “common sense” arguments, so it is tragic that they seem to get their opinoins on road safety matters from watching Top Gear. It is far from irrelevant that Tory Leader of the councilor, Roderick Bluh, is himself a serial offender, who lost his own driving license for three months after gaining 12 points for speeding.

Road traffic deaths are sadly a day to day part of urban life, and only when it comes close to home do we really notice. Back in march this year, a seven year old boy, Tyrese Hannah, was killed by a car that mounted the pavement, as he walked his dog alongside his mother. Tyrese attended the same primary school as my two sons and every day I pass the tragic roadside shrine where family, friends and neighbours have marked the site of their terrible, inconsolable loss. It was particularly heartbreaking when Tyrese’s birthday came around a few weeks ago, and people left cards and balloons tied to the lamppost.

Every month in the UK there are three children killed on the roads, many more are seriously injured. In 2002 there were 59 fatal car accidents or accidents involving very serious injury for every 100000 people. The figure in London is higher, where there are on average over 5000 deaths or serious debilitating injuries on the roads every year.
at October 23, 2008

NO! It is collisions that kill.

I find it odd that there is a media panic over knife crime, yet, breaking the law in a manner that endangers, and kills is seen as a "right".

As individuals we can do more about reducing the risk of reckless behaviour, than we can about violent crime.