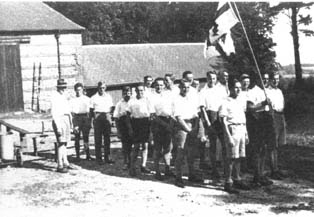 I notice an academic at Cambridge has been challenging the notion that the Beatles were full fledged anarchist revolutionaries...in their place he has put a figure more familar to readers of my another green world blog.

He singled out a little-known Cambridge student Rolf Gardiner, who was fascinated by the concept of Jugendkultur in Germany as a way that young people could express themselves more freely and challenge their elders.

Gardiner's cult championed physical labour and rural reconstruction, Fowler said, recounting also how he organised naked bathing sessions along the Cam river, as an expression of "back to nature" values.

"People forget that real youth movements are about a lot more than spending and consumerism -- they are a way of life," added the academic from Clare Hall college, Cambridge, author of "Youth Culture In Modern Britain, c.1920-c.1970."

"People like Rolf Gardiner were true cultural subversives, pop stars before pop even existed. In terms of the influence he had on giving Britain's young people a sense of identity ... he is just as important as Mick Jagger."

Could this be the same Rolf Gardiner who was a friend of Walter Darre Hitler's agricultural minister, who praised aspects of National Socialism and made anti-semitic statements. The green far right don't deserve our praise...I think capitalist musicians are rather more fragrant.

More of my thoughts on Rolf here