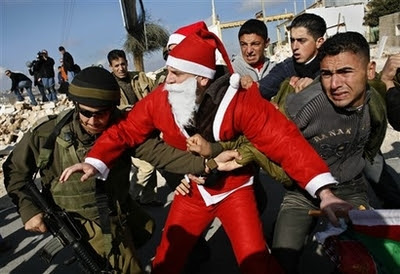 Just had this, worth reading at this time of year.

The other story of Bethlehem
Churches will be crowded throughout Britain over the coming days in celebration of events believed to have taken place 2,000 years ago.

Christian clergy will commemorate the birth in the Palestinian town of Bethlehem of their saviour as the son of God who had no place to lay his head and was, accordingly, born in a manger.

In Palestine today, lack of shelter remains a major problem for the people of Gaza, many of whom have been condemned to live in tents for the past two years.

Monday will mark the second anniversary of Israel's unjustified military assault on the coastal enclave, when its armed forces wiped out over 1,400 Palestinians in just over three weeks.

The attack was designed to destroy social infrastructure to make people's lives unbearable as a way of turning the Palestinian people against Hamas, which they had backed in free and democratic elections.

Israel has tightened the blockade against Gaza, despite international condemnation of this collective punishment of civilians, which is classified by the Geneva conventions as a war crime.

The occupying power, which presses ahead with its illegal colonisation of the West Bank, refuses to allow concrete or other building supplies into Gaza, preventing both the Palestinians themselves and the United Nations from beginning vital reconstruction.