Don't forget the Prophet Mohammed was a feminist 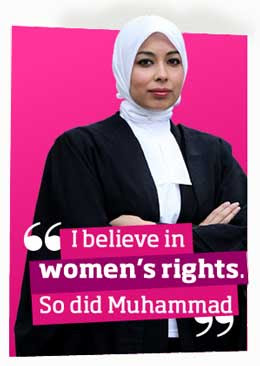 A great letter in today's Morning Star that sums up my feelings, although plenty of Muslims, Marxists and Christian's have followed the good principles of justice, equality and pluralism of the founders, although equally plenty of manifestations from them been pretty rubbish....think Albania for Marxism for a start!

Two things really wind me up when it comes to Islam
1) The amount of ignorance and abuse heaped on Muslims.
2) The support of governments like the US and UK of Saudi Arabia whose salifist Islam is indeed hostile to human life!

And don't put abusive comments in the box, read up on Rumi instead.

Any way on to said letter.

Although an atheist myself, I find Richard Sunderland's letter quite amazing (M Star December 20).

Has he read no history? Does he not know that most ideological movements (not only religions) get taken over by groups more interested in power than the principles they are supposed to be advocating?

Look at what happened after Cromwell's victory, or the French revolution's.

Did the revolutionaries succeed in establishing the New Jerusalem or Liberty, Equality and Brotherhood?

Did the Soviet Union continue to apply the Marxist theories of its founders? Did Mohammed's reforms survive his death?

Both in Islam and Christianity, much of the original message was buried by those who followed.

Pauline Christianity adapted an essentially Jewish movement to fit the Roman Empire - including the condemning of Jews as Christ-killers and absorbing a host of local pagan cults, turning the local deities or cult heroes into saints (St Venus, St Dionysius, St Helios etc).

Arab women in Mohammed's time were not segregated, nor did they wear the veil - those were centuries-old Persian customs, taken over by the Arab chiefs when they conquered the Persian empire.

Mohammed's favourite wife, Ayesha, raised an army to fight in the civil war that broke out soon after his death, and led it into battle. Tradition describes her as a beautiful redhead, proving that she didn't wear a veil.

It is no accident that "liberation theology" developed in Latin America, which was (and largely still is) under the heel of US imperialism as Palestine was under Rome's in Jesus's time. And it was a revolutionary movement - despite Ortega's deviation.

The answer to the subsequent perversion of progressive movements is to steer clear of irrational myths (ideologies) and stick to objective analyses (as much as possible). And to read Marx, instead of "interpreting" him.

Thanks for re-posting this Derek - it's a well-written piece that I shall fwd on to people who might be interested.