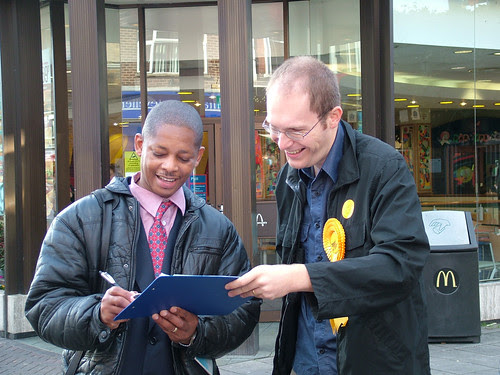 Lib Dem councillor Tom Papworth believes 'police' should 'deal with the 'student reactionaries', he doesn't want 'free education' leading to big tax bill. No doubt the tax bill for the likes of corporations and the well off would be too much.

He also believes that the cold weather would have seen sturdy Liberal Democrats attending their cancelled conference, while the hot headed students would have been disciplined by frosty temperatures.

Papworth blogs on the Liberal Vision website, an internal Liberal Democrat group committed to a free market agenda which is a must read guide to the future of the party, indeed their mission statement notes:

Liberal Vision exists to promote individual liberty, a free economy and limited government. We advocate these goals within the Liberal Democrats, among the political and media community, and to the wider public.

Papworth is, thus a keen member of the neo-liberals and a supporter of the Adam Smith Institute. I am guessing in the free market utopia, you could ask for your money back if your lib dem vote delivered a different promise to the one you were sold.

This hasn't happened yet and Papworth seems quite fucked off that angry shoppers, I mean voters, are making demands on the Lib dems for broken promises.

This is what he had to say about today's cancelled Lib Dem London conference.

News is breaking that London Region Lib Dems have been obliged to postpone the London Region conference.
Both the initial and the replacement venues asked the Lib Dems to cancel the event because they feared that it would result in violence. Demonstrators opposing university funding reform had pledged to target Saturday’s event.
The headmaster of the school originally planning to host the event asked London Region to move it; but the replacement venue also raised security fears.
The concern of the venues is understandable considering the offensive and threatening language used by the ironically named “Free Education Campaign” (free for the students; very expensive for the taxpayers). Fiona Edwards of FEC spoke of Lib Dems “running scared” and promised to “chase them down.”
Ironically, FEC was only expecting up to 1,000 demonstrators, which should have been easy for the local police to manage. Indeed, with rain, snow and fog expected to complement the freezing temperatures, it’s hard to decide whether the demonstration would have been sparsely attended or a great opportunity for some of the hot-heads to cool off.
Personally, I’m disappointed that the defenders for middle-class welfare weren’t faced down. London Region should have pushed ahead with the conference at whatever venue they could find, and let the police and the weather deal with the student reactionaries.

Papworth should be congratulated for telling us exactly where the new look Liberal Democrats stand especially with all the confusion put about the likes of Danny Alexander MP on Question Time.

He also usefully suggests that given current plans 'the ‘debt burden’ should not deter anybody.'

He was a Lib Dem candidate at the last General Election, details here.