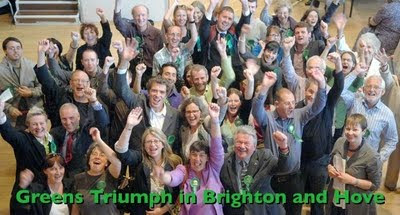 Just been told that the Labour Party have refused to go into coalition with the Green Party who on 23 seats are five short of a majority.

Local government is tough in the face of cuts but my suspicion is Labour simply wish the Greens to fail because the threat of an example that works or at least works a lot better than the still rather Blairite Labour Party would provide the threat of a good example.

I mean the SNP are hardly on the left or green but they make the Labour Party look centre-right and lacking in flair, in contrast.

So it looks like a Green Party minority governing Brighton and Hove or will Labour attempt to join a Tory coalition!

And some thoughts from the ever impressive Joseph Healy here.
at May 08, 2011