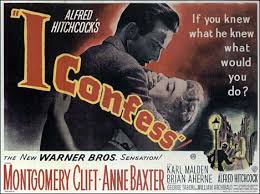 Principal Speaker is keeping me busy with the Guardian Comment is Free, a new you tube vid and lots of letters sent off and a meetings, meetings...even a bit of tv debating oil curse or blessing, so no time to watch films.

Did have a look at 'I confess' as you know far from being a Catholic, I am a god denying friend of Islam and a Zen practioneer (will try and go and do zazen tonight, honest).

Its one of the more obscure Hitchcock's but apparently the French New Wave loved it, the plot (for you Catholic bloggers) revolves around a confession of murder given to a priest who cannot reveal the murders name for all the usual theological reason.

It didn't catch me at first but definately built...the four hours taken to film Montgomery Clift (as the priest) walking across a room, struck me as I spent 2 hours the other day making a one minute long you tube offering.

Monty Clift (sounds a bit like Monty Burns, you know the guy who spends all day commenting on my comment is free pieces for the Guardian), was iconic, beautiful and doomed...its always the cars, the drugs and the drink that gets them, rather than excessive pet ownership, Marilyn Monroe famously said that he was the only person in a worse state than her.

He was famously bi, although I get the impression that sexuality did not get his knickers in a twist, rather it was general life anxiety and a nasty car accident after (?) a party with Elizabeth Taylor that ruined his good looks.

There are a couple of Clash songs about him.

Derek
If you ever get over this way, try stopping off at Leytonstone Tube Station. The underpass is decorated with Mosaics depicting scenes from Hitchcock films.
He was a local lad.