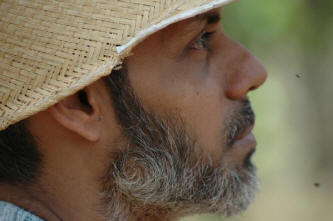 It's time we reconsidered the existing paradigm of development. The world has been talking about sustainable development. But as one of India's leading ecologists, Debal Deb, says: "It is common understanding among natural scientists that if development means unlimited growth in production and consumption of materials, sustainable development is an oxymoron. That's because unending growth of anything in the universe is impossible - except perhaps the universe itself."


The paradigm is marked by 'free market' rightest who ignore environmental problems even global warming and proclaim the demand for 'liberty', forgetting the corporations fence us all in, what liberty when Ayn Rand's boys and girls sell their butts to giant power magnets...not much!

The alternative is an environmentalism of you guessed it corporations, where environmental 'solutions' like carbon trading and biofuels are used to maintain super profit and Al Gore becomes the new Gandhi.

So the real alternative, grassroots eco development by local people, based on need not greed is forgotten and yes a lot of my work involves fighting for a Green Party based on decentralisation not top down personality politics. Capitalism, yes it isn't fit too eat.

So lets celebrate the work of Debel Deb one of the important people on the planet who campaigns for ecology.

He has an Ecology PHd and on a tiny farm in West Bengal, he has preserved over 500 types of rice.

This article in China Daily outlines his idea of ecodevelopment very much local ecosocialism based on respect for nature.

Josh Kearns visited him and has blogged this amazing account, it is a indeed a wicked world where biofuel boats claim to be green and that fraud Al Gore gets a Nobel Prize instead of Debal Deb:

Debal is confident he has collected every folk variety of rice that still grows anywhere in West Bengal, and several varieties from other locations around India as well. Every year, Debal and his team of farmer/researchers (none of whom have a degree in science or have even been to college) plant out all 542 varieties in 2 meter by 2 meter plots on 1.5 acres of paddy land. As the plants develop, they painstakingly record 35 different phenotypic or morphological characteristics for each variety.


They’re also doing research on a number of techniques that may produce higher yields of rice grains, or result in breeds that can better withstand drought or flooding. Their experiments are showing folk varieties to out-perform Big Agriculture’s so-called high yielding varieties along a number of dimensions. And they are conducting ecological studies of rice ecosystem food webs, observing all the insects, snakes, birds, lizards and other creatures that coexist with the rice.

Their data and conclusions from the various experiments is widely published in the peer-reviewed and popular literature. It is also incorporated into the information commons Debal has set up to protect the rice varieties from biopiracy by corporations like Monsanto. (Monsanto has a habit of taking folk knowledge, patenting it, and selling it back to the people who developed it through the generations for a sizeable profit.)

The accomplishments of the farmer/researchers at Basudha would be impressive coming from a university. But coming from this small plot of land, in the middle-of-nowhere West Bengal (the farm isn’t even connected to the electricity grid, let alone do they have a laboratory), and being produced by a motley group of local peasant farmer-boys led by one wild-eyed, nearly pennyless anti-globalization activist, their work is downright phenomenal. For science of this caliber and relevance to come out of such humble circumstances is nothing short of a miracle.

Basudha is a thriving example of democratic science – science by and for the people. A big reason Debal has no funding (outside of a few private donations from friends here and there) is that getting science like this funded is damn near impossible. You see, Big Science is bosom-buddies with Big Agriculture; and this kind of grassroots, democratic science-for-the-people is not what Monsanto is interested in funding.

There is another very nice blog account of his farm here:
When we arrived at Basudha after our arduous journey, we were greeted by Dr. Debal Deb and Rahul, an Indian gentleman who has been doing work in sustainability for many years and is currently traveling all over India. We had a delicious breakfast of fresh puffed rice cereal, tiny sweet bananas and jagary, which is a candy made from boiling sugar cane. It was all very tasty. The cook, Hanu, is very nice and cooks wonderful food that is all local and organic, everything is from the farm except for the potatoes.

He is of course politically active and has supported the struggle at Nandigram, where the Communist Party government of West Bengal has been trying to kick peasants off of their land for a car factory (not unusually for palm oil for biofuel boats)

The valiant struggle of the peasantry in Nandigram against the acquisition of their land and homesteads for the proposed chemical hub SEZ has drawn nationwide attention. Despite the massacre of March 14 and the continuing reign of terror unleashed by the police and hired killers of the ruling party in the state, Nandigram has refused to surrender. On the contrary, it has sparked unprecedented mass protests across West Bengal and elsewhere. People’s movements in various parts of the country against the forcible acquisition of farmlands, forests and other natural resource base of the poor in the name of SEZ and for the so-called industrial projects have also drawn inspiration and sustenance from Nandigram. No wonder, Nandigram has become a major focus of people’s resistance against the neo-liberal agenda that seeks to establish the hegemony of global corporate capitalism.

Deb has written lots of papers and is particularly critical of 'developmentalism' prefering 'get off our backism' so to speak, this cheeky essay introduces some deep ecology from Indian poet Tagore...here
at December 28, 2007