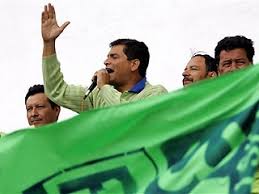 The reports issued this year by the Intergovernmental Panel on Climate Change prove conclusively that climate change is real, that the pace of global warming is accelerating, and that it is caused by human activity. If greenhouse gas emissions are not reduced quickly, climate change will have catastrophic impacts on human, animal, and plant life everywhere.

An International Day of Climate Action has been called for December 8, midway through the climate talks in Bali, Indonesia. Demonstrations and other actions will be held in some 70 countries, and in over 30 Canadian cities in ten provinces. The December 8 day of action may be the largest day of climate protest to date. For more information see these websites:

In many countries, the participants in these actions will include supporters of the recently-formed Ecosocialist International Network (EIN). Socialist Voice Managing Editor Ian Angus is a founder and coordinating committee member of the EIN. He also edits the web journal Climate and Capitalism.

He was interviewed by the Greek socialist newspaper Kokkino (Red).

Let's begin with a large question — what is ecosocialism?

Angus: Ecosocialism has grown out of two parallel political trends — the spread of Marxist ideas in the green movement and the spread of ecological ideas in the Marxist left. The result is a set of social and political goals, a growing body of ideas, and a global movement.

Ecosocialism's goal is to replace capitalism with a society in which common ownership of the means of production has replaced capitalist ownership, and in which the preservation and restoration of ecosystems will be central to all activity.

As a body of ideas, ecosocialism argues that ecological destruction is not an accidental feature of capitalism, it is built into the system's DNA. The system's insatiable need to increase profits — what's been called "the ecological tyranny of the bottom line" — cannot be reformed away.

With that said, it is important to realize ecosocialist thought is not monolithic — it embodies many different views about theory and practice. For example, there is an ongoing debate about the view, advanced by some ecosocialist writers, that social movements have replaced the working class as the engine of social change.

Finally, ecosocialism is an anti-capitalist movement that varies a great deal from place to place. In the imperialist countries, it is a current within existing socialist and green-left movements, seeking to win ecology activists to socialism and to convince socialists of the vital importance of ecological issues and struggles. We might say that in the global north ecosocialism today focuses on making the Greens more Red and the Reds more Green.

In the Third World, by contrast, global warming is already a matter of life and death. People there are fighting environmental destruction – and the environmental destroyers – on a daily basis. The fights take many forms, including land occupations, road blockades, and sabotage as well as more traditional actions such as petitions, rallies, demonstrations. Such protests occur daily in dozens of countries.

What we see there is a growing mass pro-ecology movement that incorporates socialist ideas — that's especially true in Latin America, where anti-imperialist governments headed by Evo Morales in Bolivia, Rafael Correa in Ecuador, and Fidel Castro in Cuba, are pressing for strong anticapitalist, pro-environment measures.

A recent letter from Evo Morales to the United Nations illustrates that point and another — that in the fight to save the earth, a vanguard role is being played by indigenous peoples. As Morales said:

"[W]e – the indigenous peoples and humble and honest inhabitants of this planet – believe that the time has come to put a stop to this, in order to rediscover our roots, with respect for Mother Earth; with the Pachamama as we call it in the Andes. Today, the indigenous peoples of Latin America and the world have been called upon by history to convert ourselves into the vanguard of the struggle to defend nature and life."
And he suggested a global political organization to combat global warming:

"We need to create a World Environment Organisation which is binding, and which can discipline the World Trade Organisation, which is propelling us towards barbarism."
That's not just a clever turn of phrase. In that one sentence, Morales says that the environment must be given legal priority over capitalist profits and the neoliberal policies that protect them. That's a profound idea that the left worldwide should adopt and defend.

What is the Ecosocialist International Network?

Angus: The Ecosocialist International Network was formed in October 2007, at a meeting in Paris that was attended by ecosocialists from 13 countries. Its main goals are to improve communication and coordination among ecosocialists worldwide, and to organize a major ecosocialist conference in Brazil in January 2009, in conjunction with the World Social Forum.

The EIN is a very loose and open organization. Its only organizational structure is a steering committee to plan the Brazil conference. Anyone who supports the broad goals of the ecosocialism is welcome to participate — more information is available on our website. (Editor's note: see www.ecosocialistnetwork.org.)

How do you respond to socialists who argue that there is no need for specifically "ecosocialist" ideas or activity?

Angus: In a certain sense they are correct. Marxism embodies a wealth of profound ecological thought, far more than many green activists realize.

But while concern for ecology was a fundamental part of Marx's thought, and the Bolsheviks were certainly aware of the issue, the sad fact is that the Marxist left ignored this issue for many decades. It's important to correct that — and to do so publicly and explicitly.

Using the word "ecosocialism" is a way of signalling loud and clear that we consider climate change not just as another stick to bash capitalism with, but as a critically important issue, one of the principal problems facing humanity in this century.

But there is more involved. Marxism is not a fixed set of eternal truths — it is a living body of thought, a method of understanding society and a tool for social change. Socialists whose views don't evolve to incorporate new social and scientific insights become irrelevant sectarians — we've seen that happen to many individuals and groups over the years.

Just as Marx and Engels studied and adopted ideas from the scientists of their day — Liebig on soil fertility, Morgan on early societies, Darwin on evolution, and many others — so Marxists today must learn from today's scientists, especially about the biggest issues of the day. Ecosocialism aims to do just that.

Angus: That depends on what you mean by "solve."

Dealing with global warming includes two components — mitigation and adaptation. Mitigation means reducing greenhouse gas emissions so that global warming slows down and eventually reverses. Adaptation means making changes that will enable people to survive in a world where some climate change is inevitable, and where climate chaos is increasingly likely.

In my opinion, capitalism's insatiable need for growth, combined with its massive dependence on fossil fuels as the dominant energy source, means that it is very unlikely that we will see an effective mitigation program from any major capitalist country.

Scientists say that if the average temperature rises more than 2 degrees, dangerous climate change becomes very probable. There is no sign that any of the industrialized countries will implement measures sufficient to stop such a temperature increase — anything they do will be too little, too late.

But if we do not succeed in bringing this system to an end, capitalism will undoubtedly adapt to the new climate. It will do what capitalism always does — it will impose the greatest burdens on the most vulnerable, on poor people and poor nations. Climate refugees will multiply and millions will die. The imperialist powers will fight against the global south, and amongst themselves, to control the world's resources, including not just fuel but also food and other essentials. The most barbaric forms of capitalism will intensify and spread.

In short — yes, capitalism can "solve" global warming, but a capitalist solution will be catastrophic for the great majority of the world's people.
at December 03, 2007

Very informative, I was unaware of any sort of organized eco-based movement among indigenous peoples. From my reading, such as with the Sami as discussed on the Indigenous Issues Today news blog, they are doing their best just to cope with the changes and maintain their culture. I don't know if they are actively involved much beyond that. Latin America may be different, and if so, that is great.

"The reports issued this year by the Intergovernmental Panel on Climate Change prove conclusively that climate change is real, that the pace of global warming is accelerating, and that it is caused by human activity."

Are you familiar with the ground floor movement to take solar to the masses by a company called Citizenre? They are trying market solar with an approach similar to satellite TV, cellular telephones, and alarm systems. That is to provide the customer a complete solar system with no upfront charges and make money from a service contract. In this case the service contract would be a rent agreement. They intend to put a complete solar system on clients home. When the system produces electricity, it will lower the bill from the current utility provider. In most cases the savings from the lower bill will more than cover the rent fee that the company intends to charge. The company currently has no product available but intends to deploy in the middle of 2008. They are currently taking reservations and have 25,500 takers so far. I have written several articles on this company in my blog and even have a couple of videos that I have recorded at www.solarjoules.com. Feel free to take a look. I welcome comments. As in any start up business, a chance exists that they may never get off the ground and fulfill any preorders, but if this is the case - the potential client has not lost anything. If you cannot afford the upfront cost of solar today, this may turn out to be a great alternative.
This solution would mean that we could produce at least a little less pollution and would be a great step "just in case".
If anyone would like company information you can go to www.jointhesolution.com/razmataz.

Not all Greens are red, but it's not just the color-blind that have trouble telling the difference. Check out "http://4globalwarming.com"