The Age of Stupid out this weekend 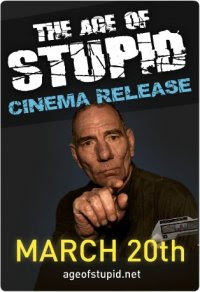 My review from the Star in tomorrow.

The danger is that viewers will watch this amazing film which calls for the transformation of our economy, society and culture and simply sign a petition or write to an uninterested MP. However, if it inspires even a minority to take more radical action, it will have achieved something very special.

The Age Of Stupid is on general release this weekend and I would urge Morning Star readers to buy tickets and take some friends - in a system dominated by Hollywood, independent film-makers need all the friends they can get.

Visit www.ageofstupid.net/screening/uk_cinema_release to see where the film is being screened.
at March 20, 2009