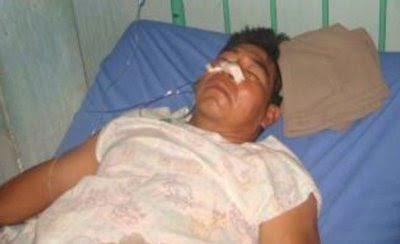 Right, this is really important, the indigenous leader Santiago Manuin, is still very ill in hospital after being shot 8 times, the police want to arrest him and move him to a prison cell, he lacks money for proper treatment. Write to President Alan Garcia and protest.

This is my translation from a Peruvian human rights group, if you can read Spanish use the original, my Spanish is a mixture of online translation, guess work and what I have gleaned before. Please spread the word...Santiago Manuin is a pacifist and has waged a struggle to prevent the rainforests of the Peruvian Amazon being logged, he is a true ecologist, if you are at all serious about climate change and other ecological threats, it is vitally important to support his struggle.

Dear President Garcia,
I am writing to you to demand an investigation into the assault on the indigenous leader Santiago Manunin Valera.

During the disproportionate and violent police raid to evict the Indigenous who were protesting in the town of Bagua, Amazonas, Santiago Manuin Valera, leader of indigenous Awajun 52 years, who at the time of the shooting was disarmed and calling for peace, was seriously injured.


Manuin Santiago, head of the Apus of the five basins of Santa Maria de Nieva, is one of the most important leaders of the communities Aguaruna-Huambisa. A pacifist, founder of the Jesuit Social Center SAIPE, he was also President of the Council Aguaruna-Huambisa (CAH) and has struggle for the respect for indigenous peoples of the Province of Condorcanqui - Amazon. He has been recognized internationally for his commitment to the environment and human rights. Accordingly, received the Queen Sofia of Spain award for his work in defending human rights and the environment.

On June 5, Santiago Manuin was shot with 8 AKM rifle bullets by Peruvian troops. He was then taken to the hospital of Las Mercedes de Chiclayo.

Despite this, on June 13, Judge of the First Criminal Court of Utcubamba, Francisco Miranda Caramutti ordered the search, location, capture of Manuin Santiago, for his responsibility in the clash in "The Devil's Curve", which killed dozens of people, including police and indigenous people. Given the location of Manuin, surprised and indignant that he intends to assign responsibility for the unfortunate death of police.

At present, the Indian pacifist leader is surrounded by police in his bed in hospital and is under pressure by some authorities to be discharged and taken to the Cells, even though his health is delicate and requires care care. Manuin has 8 bullet holes in the body and is suffering from a severe infection. Because of his bullet wounds, his colon is damaged, which requires a prolonged and intensive treatment. He is also diabetic, which complicates the healing of their wounds and requires further surgery.

As well as the case of Santiago Manuin, there are other cases of indigneous leaders who face criminal proceedings, investigations are ongoing and subject to prosecution, as it seeks to hold them, materially and intellectually, of various acts of violence. These include Alberto Pizango Chota, Saul Puerta Peña, deer Puerta Peña, Antazú Teresita Lopez, Marcial MUDARRA Taki, Daysi Fasabi Zapata, Walter Kategari Iratsimery, Roger Guardian Wall, Milton Silva, among other leaders, even though there were no valid evidence to sustain the charges against them.

We have no doubt that behind the arrest warrant against Manuin and other leaders, there are pressures from those who for political reasons, seek to criminalize social protest.

Therefore, as citizens of the world, exercising our right and ethical duty to defend life and human rights against all types of abuse, we ask that through this open letter:

1) For an investigation into the attempt on the life of Santiago Manuin Valera-ID 337600081, 52 years of age, and punish the perpetrators and masterminds of the attack on him.
2)Provide an independent medical examination and that the State ensure its integrity and full recovery, assuming the costs of medical care for injuries suffered.
3)End judicial harassment against Manuin Santiago, as well as other leaders, to withdraw the troops and police surrounding the hospital where Manuin is placed and the change of efectivice arrest warrant by the appearance.

We reiterate our belief in the innocence of Manuin, with whom we express our full solidarity.

We remind you, Mr President, you swore by your honor, for God and the homeland, to defend the interests of all Peruvians, not concealing painful facts of human rights violations. Mr Garcia, do not return to the same mistakes of your first government, because history will judge you.

In the case of persons, include the following:

Name and Surname
Identity Card
Country
In the case of organizations, indicate:

Organization name
Country
They can also send the letter directly to the following link:

With copy to: justiciaparasantiago@aprodeh.org.pe
at July 19, 2009