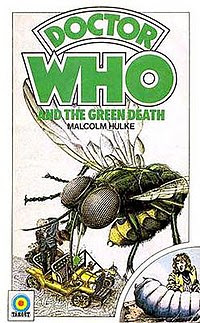 Well hot news from the BBC, probably to keep us off of thinking about the Andrew Sachs crisis, must admit I am a Tom Baker fan, the last few seasons have been good but at its best Dr Who was essential.

With it's ecological parables it was certainly a bit of popular culture that produced some green political thinking.
'

UNIT is called in after a miner from the Welsh village of Llanfairfach is found dead, his skin glowing bright green. Jo joins forces with a local environmental group, led by Professor Clifford Jones, while the Doctor investigates the nearby plant of a company called Global Chemicals.

They discover that the mine workings are full of giant maggots and green slime - both lethal to touch - that have been produced by chemical waste pumped from the Global plant.

Stevens, the director of Global, has been taken over by the BOSS - Bimorphic Organisational Systems Supervisor - a computer with a will of its own.

The BOSS plans to seize power by linking itself to every other major computer in the world,'

Barry Letts who produced it was a reader of The Ecologist.

I wonder whether Russell Brand will be the new face of Gallifrey....
at October 29, 2008

Glad to see you draw your political inspiration from such a reputable source! I presume we won't be discussing a Dalek critique of capitalism in any future lectures... :D

Well as Italian Tony used to say, its all part of the counter hegemony...

How many seasons of the god damned show are there? I recently rented the first season and it was dated 1953. Has it been running continuously since then?!?! As someone with an interest in trying to get into the show, I find that overwhelming.

You'll want to watch this, then... http://uk.youtube.com/watch?v=DtG5dK_HaGg

"The Seeds Of Doom" was another good eco-story that involved Tom Baker's Doctor. "Inferno" and the perils of mining. It goes on and on.