Today is the 190th anniversary of Peterloo 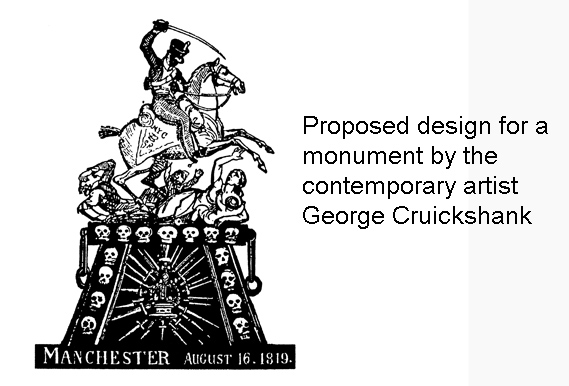 From climate and capitalism

Today is the 190th anniversary of the day when English cavalry rode attacked a peaceful crowd of 60,000 in Manchester, gathered to call for democratic rights. The event is remembered as the Peterloo, a word that combines the location of the attack, St. Peters Field, with an ironic reference to the recent British military victory at Waterloo.
In The Making of the English Working Class, the great Marxist historian E.P. Thompson writes:
“There is no term for this but class war. But it was a pitifully one-sided war. The people, closely packed and trampling upon each other in the effort to escape, made no effort at retaliation until the very edges of the field, where a few trapped remnants – finding themselves pursued into the streets and yards – threw brick-bats at their-pursuers. Eleven·were killed or died from their wounds.

“That evening, on every road out of Manchester, the injured were to be seen. The Peterloo Relief Committee had, by the end of 1819, authenticated 421 claims for relief for injuries received on the field (a further 150 cases still awaited investigation). Of these, 161 cases were of sabre wounds, the remainder were injuries sustained while lying beneath the crowd or beneath the horses’ hooves. More than 100 of the injured were women or girls.”

For many years, Peterloo was a rallying cry for working class and democratic radicals in England, a symbol of the vile nature of England’s ruling class. The lesson they drew from it, a lesson that remains valid today (witness the continuing struggle in Honduras) was summed up in The Masque of Anarchy, written by Shelley to honour those who rallied at Peterloo:
Rise like Lions after slumber
In unvanquishable number,
Shake your chains to earth like dew
Which in sleep had fallen on you -
Ye are many – they are few.
at August 16, 2009