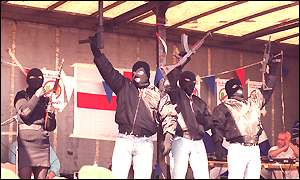 Mick Hall of Organized Rage reminds us that sectarian killers were part of the public spending plans of Britain and are now part of a wider pension crisis.

Now they are not needed the UDA are being given generous pensions....I don't suppose the traditional media or political party's will rush to point out the the UK government took part in a dirty war in Ireland.

It has since come to light the UDA was acting as a direct conduit of the UK secret state, with many of it's leading members receiving a 'retainer' from the RUC Special Branch, military intelligence or the British security services. Thus like all public servants on short term contracts, when they have outlasted their usefulness, the members of the UDA expected; and have now received a severance payment of ten million pounds.


Understandably there paymasters felt unable to pay it directly into the UDA's bank account and a repeat of the open door policy which was briefly practiced by the Northern Bank might bring a rash of unfavourable publicity, besides it is doubtful the UDA tops would have the ability to launder ten million pounds in readies.


As McCann reports in the Derry Journal, the UDA has now agreed to dispose of its guns, hatchets, hammers, cut-throat knifes, baseball bats, pliers, blow torches, etc, on the understanding they will be paid ten million pounds when they take up their new posts as 'community activists.' Nice work if you can get it some might think, however there was an obstacle in the way. For whilst the UDA was out and about killing catholics on their master bidding, other folk have been doing the vitally important work of serving the unionist working class community as community activists.