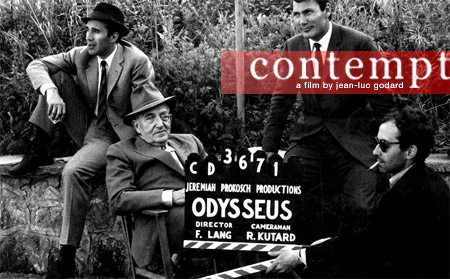 It really isn’t fair to other films; it sets the standards for quality too high. I’m off to stare a blank wall to detox. Maybe then I’ll be able to watch something else without disappointment.

Jean-Luc Godard's 1963 film Le Mépris, translated as 'Contempt' deserves to be seen as the numero uno in the history of cinema

It is beautiful to watch.

The ideas advanced are very rich.

It charts the growing contempt a screenwriter has for Hollywood represented by a film producer played by Jack Palance. The screenwriter's apparent desire to pimp his girl friend to Palance or at least turn a blind eye to liason that may cement his contract, leads to her contempt for the screen writer.

Fritz Lang, the Germany film maker best known for his work in the 1920s, plays himself, resisting the producer Palance.

The plot centres around the filming of the Odyssey. The gods seem to manipulate the cast but Godard reminds us that gods are invented by humanity.

There are structures that control us and shape our subjectivity but ultimately we need to show the structures the contempt they deserve, to break the chains of control and make our own history. That there are some very obvious moments where control has been taken from Godard and scenes stuck in to boost ticket sales (mainly involving nude shots of Brigitte Bardot) reinforces such a contention.

Godard uses Brecht as a resource, Godard also seeks to advance changing and powerful ideas though his films and of course, its fine art with a capital 'A'

I think he had and still has a pretty powerful sense of humour, King Lear is extremely funny and very provocative.

I get the impression that he was by no means a nice human being, may be he has mellowed with age. His family came from a caste of far right Swiss fascist fellow travellers I believe. I guess while he moved to the left, he has rarely been associated with compassion.

I am not alone on this, here is a good summary and a command to watch and see for yourself, I hope you do this, (incidentally I must work out how to post vids here so you can get a taste without additional googling)


Le Mépris works on so many levels that it is impossible to adequately describe, you must view it for yourself. We first feel Godard's contempt for the current filmmaking techniques through his lack of respect for the Jack Palance character and all that he represents. We also feel the power of the burgeoning contempt of the main character, Brigitte Bardot, towards her husband, played by Michel Piccoli. Her loathing of him develops convincingly against the counterpoint of the soothing steel blue waters of the Mediterranean and the memorable beauty of the island of Capri. Finally, there is the theme of money versus creativity as represented by the conflict between Piccoli (screenwriter) and Palance (producer); money triumphs as usual, a state of affairs which an artist will naturally despise. [...] Le Mépris is a brilliant study of marital breakdown, artistic compromise, and the cinematic process.

Hi,
I am an editor with Fluwikie.com. I really liked your website. While reviewing the website, I came across the page and was impressed with the Flu and Diseases related information. I am contacting you in hopes of having Resource Tab added as a resource to your site. We want to spread public awareness. I hope you can help me out. Your site is a very useful resource.

Please email me back with your URL in subject line to take a step ahead and to avoid spam.

Derek, I am delighted that you enjoyed my review of Le mépris, thank you so much for mentioning it.