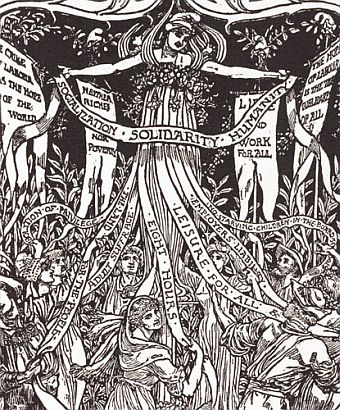 "All For One and One For All!"
Some Principles of the Commons
By PETER LINEBAUGH

Human solidarity as expressed in the slogan "all for one and one for all" is the foundation of commoning. In capitalist society this principle is permitted in childhood games or in military combat. Otherwise, when it is not honored in hypocrisy, it appears in the struggle contra capitalism or, as Rebecca Solnit shows, in the disasters of fire, flood, or earthquake.

The activity of commoning is conducted through labor with other resources; it does not make a division between "labor" and "natural resources." On the contrary, it is labor which creates something as a resource, and it is by resources that the collectivity of labor comes to pass. As an action it is thus best understood as a verb rather than as a "common pool resource." Both Lovelock's `Gaia Hypothesis' and the environmentalism of Rachel Carson were attempts to restore this perspective.

Commoning is primary to human life. Scholars used to write of `primitive communism'. `The primary commons' renders the experience more clearly. Scarcely a society has existed on the face of the earth which has not had at its heart the commons; the commodity with its individualism and privatization was strictly confined to the margins of the community where severe regulations punished violators.