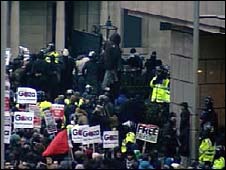 Well I am not sure that the SWP line officially was as bad as David suggests, I am open to SWP supporters to comment, am also sad that the holocaust analogy was made by an Isreali defence minister....but I don't just post things here I 100% agree with, that would be a)dull and b) restrict debate.

I don't think 'go back to New York' is OK as a slogan, for example. Although I generally find the Lenin's Tomb blog from an SWP member very useful and haven't seen anything racist on it, far from it.

over seventy Jewish writers and activists wrote to condemn Israel's atrocities in Gaza. The letter calls for a campaign of boycott, divestment and sanctions, which was also recently backed by Naomi Klein. This letter was cited twice by speakers, one of them Azzam Tamimi, who said "this war is not between Muslims and Jews, it is between the oppressed and the oppressor".

David's piece is from Socialist Unity, where I also blog from time to time.

I do consistently find David worth reading..any racist trolls can fuck off by the way!


“Just got back from the demo in London which was massive - probably three times as big as last week, or more, which on my estimate of last week (25,000) means probably more than 80,000 on a freezing cold day - snowing at one point!

Protest at gates of Israeli embassy

The positives were it was again very mixed in terms of ages and ethnicities, more trade union banners this week - and very militant. There was a vibrant atmosphere. Lots of Jewish anti-war protesters among the crowd, which was acknowledged from the platform, which also included Jewish speakers.

Very important that it was a massive turnout as tomorrow the Board of Deputies are organising a big pro-Israel rally to which they will be bussing people in for from far and wide.

Hope the organisers are sensible enough not to hold a another march next week but give themselves a breathing space to build for an even bigger one in maybe two/three weeks time. You can’t turn out huge numbers week after week.

Some of the negatives that need to be addressed:
* The stewarding was very poor. The failure to move people on past the Israeli embassy as darkness was falling and the riot police were tooling up made a confrontation almost inevitable and will give the media an excuse to skew the reports around the violence rather than the numbers, strength and demands of the demo.

* Although the vast majority of placards were clearly in line with the demands of the demonstration (end the siege, stop the killing) there were more than a sprinkling of placards this week with Nazi analogies etc that were more than borderline antisemitic and will be used by opponents to discredit the protest. Again the organisers/stewards need to think about how to deal with this.

* The SWP colonised a large section of Speakers corner where the march was gathering and were bellowing puerile slogans through their megaphones at the demonstrators as they arrived, appealing to them to “destroy Israel” (and presumably among them the Israeli anti-war movement) and calling on Zionists to “Go back to New York”. Not sure which aspect of socialist theory they think that comes from. But if they think the problem is Israeli/Jewish people rather than the oppressive Zionist state then they really have a lot of learning to do.”

"But if they think the problem is Israeli/Jewish people rather than the oppressive Zionist state then they really have a lot of learning to do.”

David
I might be old as your grandfather but reading your article, just brings me back almost 70 years ago.
I am very sorry to tell you, that the one who has learning to do is you David.
My father too thought the same as I was a kid in Germany, that the Nazi's will not harm Germans who happened to be Jews that assimilated into the German society and imbued with German culture.
Don't you see there is NO deferent for those anti-Semites as they see you and Israel as the SAME ENEMY
How can all of you be so blind and naive, only one or two generation after WWII took place.
You write as you have any power to change those anti-Semites point of view and wonder what will make you realize that the Hate is equal to Israel and the Jewish people.
It will slap your face as it did for us, Hope you will not have to learn it the same way I did.

here's a little interesting something:
http://www.guardian.co.uk/politics/2003/dec/19/immigrationpolicy.labour

The man is a vile and odious anti-semite. For crying out loud Mr wall, see it for what it is and stop lauding these people. They are not romantic revolutionaries.

He didn't say anything anti semitic, and notice the Orthodox Jewish men standing with him!
He did use very agressive terms and he may well be an anti semite, but its pretty shaky evidence to use. I understand why Palestinians might be pretty wound up about things.

of course he's an anti-semite you muppet