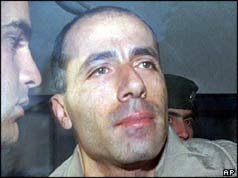 Remember he revealed that they had nuclear weapons and was entrapped and put in prison for doing so.

'"Cindy" paid for air tickets to Rome, said that her sister had a flat on the outskirts of the city, and suggested that they could have a holiday there. Vanunu believed her until the moment he entered the flat and was overpowered by two men. He was injected with a drug, smuggled on to a ship and taken back to Israel. At Mossad's headquarters, he was shown a copy of the Sunday Times story which had appeared on October 5 and told: "See the damage you have done."

Convicted of treason and espionage at a closed trial, Vanunu was jailed for 18 years. The first eleven and a half were spent in solitary confinement. There was fear for his mental health as he grew increasingly despairing. For the first part of his sentence, the light in his cell was kept on all the time.'

Released from jail he has been almost constantly harrassed and re-arrested time after time.

Looks like he was arrested for planning a date with a Norwegian women.

If you remember he was kidnapped back in the 1990s, entrapped and whisked off to an Israeli jail.

Protest and spread the word.

It's not completely surprising that that Israeli authorities (or Zionists, as you've thrown in a propos of nothing) have arrested him for violation of a court-ordered parole mandate. Of course, that's not to say it's fair. It isn't. But surely it's over-simplifying it to say that he's being harassed for having a Norwegian girlfriend. States are going to be pretty protective of their military secrets regardless of whether they are involved in an inter-ethnic conflict.

Do you and other Greens use the word "Zionist" interchangeably with "Israeli"?

Maybe you should think on about the words, how you use them and what they really mean to you, eh?

And what they convey to others?

Though I would not have described the sequence of events in quite the same words as Derek did: It has been nearly two decades since Vanunu could collect any useful military secrets. The Israeli prosecution appears to act more out of the intention to deter others and to avoid further attraction of attention (or, one could possibly say ‘revenge’?) than counter-intelligence.