Marxism and Ecology: Capitalism, socialism and the future of the planet 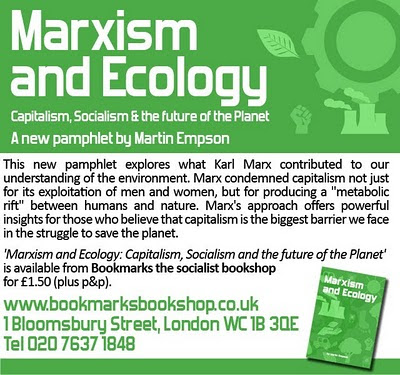 Marxism and Ecology: Capitalism, socialism and the future of the planet. By Martin Empson. A Socialist Worker pamphlet. £1.50. (available as hard copy only)
'In this pamphlet I will look at how the ideas of Marx and Engels explain how human society has related to the environment at different stages in our history. At why capitalism is so environmentally damaging and why placing Marxist ideas back at the heart of the debate about what sort of society we need to save us from ecological destruction is so urgent.'

Its been a pleasure to work with Martin Empson, I have shared platforms with him, the last time was in Nottingham at a discussion about the failed Copenhagen conference along with Labour MP Alan Simpson in December.

Martin is a keen advocate of green trade unionism. He is a leading light of the Campaign against Climate Change Trade Union group in the UK, he has strongly supported the Vestas workers on the Isle of Wight who occupied their wind turbine factory when it was closed down, he has also been involved with the One Million Green Jobs project.

This is not an academic text though but a closely argued call to action, while it has been produced by the Socialist Workers Party (who I often critical of), it is a great resource which will be of value to many on the left and the environmental movement. It will, of course, be of particular value to those of us who see ourselves as 'ecosocialists', although Martin prefers the simpler label of socialist.

Martin Empson argues that climate change is just one manifestation of a wider ecological crisis and that ecological problems are not primarily about what we consume but how we produce.

We are often told to turn our heating down and to use less. Drawing upon Heather Rogers book Gone Tomorrow, the Hidden Life of Garbage (New Press, 2005), the booklet argues that capitalism has by its very nature to produce waste. The quicker we consume, throw away and buy again the better capitalism works. Its not however our consumption which drives the system, we need to be encouraged to consume more by a massive dose of advertising.

The irrationalities of capitalism based not on human need but on the unceasing demand to turn money into capital and back into more money is gobbling up our planet.

Socialism has often been criticised for failing to include a green dimension. Martin Empson argues that the Stalinist system disregarded both humanity and nature, with the Soviet Union creating huge environmental damage from Chernobyl's nuclear disaster to the dessication of the Aral Sea, drained for cotton production.

'Stalinism' can, thus be seen as a perversion of socialism. I think I would go further, most shades of red in the 20th century from council communism to centre ground social democracy (Attle and Wilson) to the followers of Trotsky were far from green. Trotsky was keen to reshape nature, to redesign mountains and redirect rivers, I have never been convinced that he was a friend of the bear or sympathetic, like William Blake, to the robin 'red breast in a cage'.

Dramatic revisions have occurred, veteran British socialist Tony Benn is a strong opponent of nuclear power but as a Labour minister he helped promote it. Fidel Castro is a radical ecologist and Cuba is pioneering ecologically sustainable socialism. In the 3rd millenium Trotsky's Fourth International (USFI) prefer to describe themselves as 'ecosocialists' and indeed the great Peruvian revolutionary leader of the 1960s Hugo Blanco publishes 'Indigenous Fight', an ecosocialist newspaper.

Anyway I am getting a little ahead or behind or sideways from Martin Empson's booklet. His key argument is that there is strong evidence that Marx and Engels were keen ecologists. Although this argument has been developed elsewhere, Empson captures it in a few digestible pages.

Marx and Engels were fascinated by the natural sciences, showed concern over a huge range of environmental issues including deforestation, soil erosion, water pollution, food additives and of course industrial pollution. From early works such as The Paris Manuscripts, where Marx discusses the unity of humanity and the rest of nature, Engels The Conditions of the English Working Class' where he shows how pollution destroys the health of workers, through to Das Kapital, environmental themes are explored.

Marx and Engels studied capitalism as a system hostile to both workers and nature. Capital is a vampire that sucks the energies of humanity and the rest of nature. While Marx argued exchange value is a product of human labour power, he saw use value as equally a product of nature and the part of nature which is human.

Capitalism paradoxically builds as it destroys, yet ultimately it has to be replaced by a rational system that produces what is useful and beautiful, not just endless accumulation for the sake of accumulation.

Building on the firm foundations of John Bellamy Foster's seminal work 'Marx's Ecology', Empson reminds us that Marx's key ecological insight was the concept of a metabolic relationship between humanity and the wider environment. Marx argued that the rift in this metabolism had to be healed.

Martin Empson's booklet is a short reminder of the green aspects of Marx's thought, a critical account of the population bomb obsessed Malthusians and a plea for grassroots mobilisation for revolutionary change.

I would have loved to have seen an account of the indigenous struggle for ecology and there could have been more detail about green trade union struggles, but all in all this is a very useful booklet.

Well worth £1.50 of any ones cash....if you like it you might want to move on to John Bellamy Foster 'The Ecological Revolution' which I reviewed here.
at January 09, 2010

Because Maxists have really done a good job protecting the environment haven't they? Delusional trash.

Um yeah. Marxists are really f**king it up. I mean, Cuba may be the only country that is rated as actually sustainable but clearly they ought to be taking their direction from such luminaries of environmental protection as Canada, USA, Australia, etc etc etc

Yeah Communist Soviet union was such a enviromentally friendly nation

yeah 'with the Soviet Union creating huge environmental damage from Chernobyl's nuclear disaster to the dessication of the Aral Sea, drained for cotton production.'

if you read the pamphlet, you'll see the Marxist arguments against a bureaucratic, state capitalist system that prevailed in russia and eastern europe. It wasn't sustainable because it was based on capitalist ethics and ideology after Stalin.

Marx was a visionary in many ways, this being one of them, 150 years ago he could see the damage that capitalism could bring to the planet, with short term thinking for short term profit.

Instead, true Marxists put the people and planet before profit. Furthermore, we don't see it as our role to dominate nature in the same way as the stalinist state capitalism, instead it is for true socialists to heal the 'metabollic rift', and allow us to reconnect with nature, our own production and our own 'species being'.

i appreciated the article, its naturally correct for me that socialism and green politics are two sides of the same coin. but if you're against capitalism and cutting down trees, why can i only get a printed and posted copy of your pamphlet and why does it cost money?

if it was free and online, i would have read it by now...

well its not mine...but yes open source and free is best.