'Keep your truncheon in your trousers!' 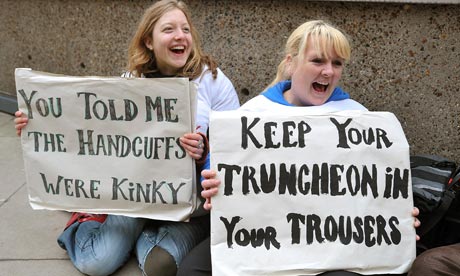 Women blockaded the Met HQ today as a protest against the sexual abuse of women by undercover police agents.

Such abuse is a weapon used to disrupt protest, a means of social control.

Organiser Sophie Stephens said: "It's time for the abuse of women by undercover police officers to stop. If a person is pretending to be somebody else, if they are spying on you, then you absolutely cannot give your informed consent.
"Women are not able to make an informed decision about who they are having a relationship with if they are being duped by police officers. We also want a judge-led inquiry. We don't trust the police to police themselves. They have showed time after time they believe they are above the law."

The great G.K. Chesterton wrote a novel called ‘The Man Who Was Thursday’.Syme is recruited to go undercover and infiltrate the anarchist Council of Days. Syme discovers that all the other anarchists are in fact undercover detectives, each mysteriously employed to defeat the Council of Days – there is no anarchist cell.

How do I get in contact with any of you who posted this photo and blog??? You can find me at