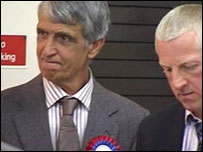 Harry's place has been working to find Greens on the BNP list, I wonder why this could be....three are listed apparently and Lib Dems, Conservatives, Labour Party and UKIP.

I think publishing details of bnp members addresses is unethical and it is no debate illegal....it is not something I am going to do. However I am going to look at one ex-member of the Greens who joined the BNP in the 1990s, all the material is from available and legal sources..

One ex-Green who joined the BNP was Robert Baehr...his particular angle seems to be Islamaphobia...I remember him from Whatley Quarry so a bit sad about his political trajectory...we were there protesting not as bit part actors in Doctor Who.

Robert Baehr hit national heasdlines during the Newbury bypass protest when he broke a court injunction and was sent to Pentonville Prison for campaigning against the road. He is also the founder of Tinkers Bubble Britain's best known alternative community. His involvement in the BNP came to light after an interview he did for Countrysider paper the paper the BNP produced for the countryside march. Other people in the environmental movement like Earth Firth should be aware of fasicsts like him in the movement!

This is from an Observer article:


After a sour 90 minutes, there is a break, during which I speak to an organic farmer and longtime road protester from Somerset called Robert Baehr. He left the Greens, he says, because they were multiculturalist and feminist. He is worried that the orchard that he plans to bequeath to his sons will be seized by the Islamic republic he believes Britain is set to become.'

'They will do to us what the grey squirrel did to the red squirrel in this country,' he says. This kind of thinking has long played around the fringes of the ecology movement. Back in the 30s, Henry Williamson, the author of Tarka the Otter, was a vocal advocate of Mosely

I also found this, I am assuming it is the same Baehr

Baehr further alleges that "Jesus stood between the fallen woman and the lynch-mob, whereas Mohammed would have been the first to cast a stone". In fact, the passage is disputed, and some early manuscripts don't contain it at all (see the footnotes to the Good News Bible); Jesus (peace be upon him) may have been using his authority as a Prophet and Messenger of God in the case of this one woman. Our Prophet (sall' Allahu 'alaihi wa sallam) had a woman's hand cut off for stealing, and this woman was a member of one of the more powerful tribes of Makkah, the Makhzoum, and rebuked one of the Companions for trying to intercede for her.

BNP membership has soared with Islamphobia...

Nick Griffin seems to be a fan of Mr Baehr, he is on record discussing a trip to Somerset:
Also heavily involved at the well-attended inaugural meeting is an old hand, Bruce Cowd, and the anti-road protester and Tinker’s Bubble rural collective co-founder Robert Baehr, who gives a quiet but passionate speech about how we each must strive to be worthy of this ancient and delicate land of ours. This is nationalism at its deepest level, almost of religious intensity and profoundly moving.

More on why some people go from Green to far right another day...but lets not pretend it happens very often or that the fash don't include some ex-Tories or even ex-Socialist Alliance members, Lib Dems, MRLP, etc...and of course there is the old MI5 trick of individuals being members of different political organisations at the same time...met a few of them as well in my long years as a Green Party member.
at November 19, 2008

I'd read about this character a few months ago, the positive side of this is that islamophobes do not feel comfortable in the "Multicultural and Feminist" party we are today.
I'm very happy with us being a "Broad Church" as they used to say about the old Labour Party, in fact thats why I'm in the Greens not a small ideologically pure sect, but I'd rather see people like Mr Baehr out of the party.

Rather be a wanker than a racist, so what and so when did he join.