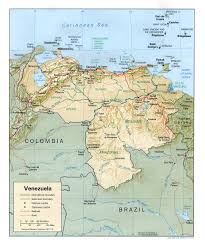 you can tell the Guardian's high standards by the fact they run propaganda demonising environmentalists as ecoterrorists sourced some suggested straight from the military!

The great thing is if you can get a 'left' or 'liberal' paper to run propaganda those on the left are more likely to be fooled.

In Colombia to the North of Venezuela, death squads clear indigenous people from the land to make way for biofuel...this is what the media and conventional politicians are happy with. No media frenzy against Uribe. Journalists who punish Chavez and praise Uribe, drip not with ink but blood.

Any way I am sure the Guardian are suffering with the recession, so let them know what you think about their recent material!

Chavez's work which is over whelmingly progressive is demonised, I for one quite strongly disagree with his nuclear power decision, but the media goes into over drive when he and others make progress.

Rory Carroll is the Guardian Venezuela 'expert' read about him here.

Some salient points from Venezuela Information Centre in reply:

The piece is overwhelmingly negative with a number of misrepresentations and inaccuracies, which undermine the legitimacy of the elected government of Venezuela, ahead of the local and regional elections tomorrow.

Whilst acknowledging some of the social gains and Venezuela's "vibrant democracy" it suggests that Chávez is restricting freedoms, is "autocratic" and gives the impression that Venezuela is going backwards under his leadership. In reality 10 years of the Chavez-led government in Venezuela has seen dramatic increases in social inclusion and democracy, more information on which is provided below.

The piece claims that the Chávez government is "an autocratic government," and implies it no longer will "uphold a constitution that guarantees basic human rights". In reality democracy and human rights have been expanded in Venezuela in recent years:

· The best people to judge this are Venezuelans themselves. The 2008 annual survey of Latin American views by the respected Latinbarametro organisation found greater satisfaction with and support for democracy. Support for democracy is at 82% in Venezuela but across Latin America averages 57%. Additionally, Venezuela is the region's second-most satisfied country regarding the functioning of democracy with 49% support, against a regional average of 37%.

· Previously excluded sections of the population are now able to vote, with 17 million Venezuelans eligible to vote in these elections, reflecting a 64% increase in the number of registered voters between 1998 and 2007.

· President Chávez and his coalition of supporters have won eleven out of twelve national votes since Chávez was first elected in 1998. In the 40 years prior to President Chavez's election, there were only 15 national electoral contests.

The piece also includes a specific, inaccurate, allegation that the government is "cowing" trade unions. The reality is that trade union rights are guaranteed constitutionally, the percentage of trade unionists in the workforce is increasing and the ILO at its recent annual conference group rejected claims that Venezuela "violated" trade union freedoms.

The editorial implies the government is overseeing a deteriorating social situation. In reality, social progress and a commitment to public services in Venezuela has meant:

· Over 1.5million Venezuelans have learnt to read and write in five years through the programme Mission Robinson, and illiteracy has been eradicated to UNESCO standards.

· Venezuela now has the highest minimum wage in Latin America.

Specifically, the claim of "chronic food shortages" does not recognise recent developments. A national poll by IVAD (a well reputed, anti-Chavez, pollster) conducted for the period 16 Sept - 10 Oct 2008 did not register this as an issue the population believed needed urgent attention. In part this is due to recent actions of the government in tackling food hoarding and embarking upon a programme of public food distribution, especially in poorer areas
at November 22, 2008