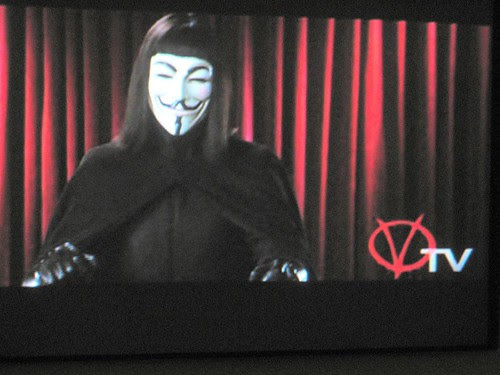 Anonymous have claimed to have taken down the BBC website, according at least to UkUNcuts activist Aaron Peters.

A response to the failure of the BBC to report accurately on the anti-cuts protest on 26 March.

Anonymous do view Britain as a hive of secret police activity and repression as you can see from the statement below and they do have the capacity...

However I am guessing that the argument against anonymous being involved is well argued here.

You and your fellow citizens have no advocates for your well-being and no one genuinely committed to defending your interests. Each government that hides behind the facade of your fake democracy has in reality been the puppet of international big business and media propagandists. Agents of the establishment use fear, misdirection, intimidation and even violence to perpetuate their hold over the population and, worst of all, the tax revenue of your fellow citizens regularly goes towards bankrolling the government sanctioned class war against you. On the other end of the spectrum, at the grassroots of your society, those who claim to be looking out for your interests are interested only in creating their own narcissistic personality cults or reaping the profits that come with presenting themselves as a "leader of the working class" while masking themselves in the dogma of political idealism.

The wealth of the United Kingdom has now turned into the personification of many of its problems. The top earners now buy their way into the governments favour and bankers who helped precipitate the previous crisis received £850 Billion of your own taxes while the poor are left to starve and suffer. While the financial sector is poised to distribute record profits and bonuses to its cronies and accomplices, the government has decided that the average hard working citizen must suffer record levels of austerity and hardship to pay for this disaster.

Internationally, the governments of the UK have also supported some of the world’s most bloodthirsty tyrants. From Margaret Thatcher's support of the Chilean fascist Augusto Pinochet, to Tony Blairs recent pledge of solidarity to Egypt's Hosni Mubarak during the uprising. The sales of tear gas, machine guns and arms components to these regimens over the last two years show that the foreign policy of the United Kingdom has been one of continuing empire which has been implemented at the expense of some of the world’s most vulnerable people and financed by the hard-earned money of desperate British citizens. The history of the United Kingdom is one of continuing empire, provocation and war.

This situation is no longer acceptable.

We in Anonymous sense your displeasure and we also note the ever increasing tide of propaganda and the iron fist of the state being used more and more often to put down dissent before it begins. The law is no longer the protector of the citizens, but the protector of the wealthy few from the many who have very little. It is almost impossible to fight the government when working inside the laws that the government makes because, more often than not, such laws are designed to prevent those with legitimate grievances from doing this. Justice is now merely a commodity which only the wealthy can afford.

Anonymous is aware of the anger that seethes under the facade of your country's diplomatic image. We hereby incite your people to rebellion against the establishment which has suppressed you generation upon generation. It is time to take a stand and realise that solutions will not be found in the corruption of mainstream politics. You must seize the opportunity to rally for freedom. Anonymous stands with you in this struggle and will fight alongside you in the battle for permanent change. Let your enemies stand forewarned.

Hm, let me see. The Anon News website and blog do not report attacking BBC websites nor have they published any press releases for the attack.

Also Anonymous News blog said that Anonymous DID NOT hack BBC servers. Also if you did any correct reporting on Anonymous (like Al Jazeera or other activist bloggers) you would KNOW that Anonymous does NOT attack any NEWS organizations. Not even Fox News. Anonymous didn't even take down West Boro Church's website. That was one hacker who took credit for it.

So please next time you publish any reports/news stories on Anonymous, why don't you try doing some actual research instead of posting any material that will bring people to your page.

That's the funny thing though: if you troll Anonymous by acting... well, anonymously, you're not trolling them anymore- you are them, regardless of what your motives were.

In soviet Russia, Anonymous pretends to be you!

Hax0rz on st3r0idz, I tell ya. The Internet Hate Machine strikes again.