Open Letter from Dr Derek Wall 'A warning to Anonymous' 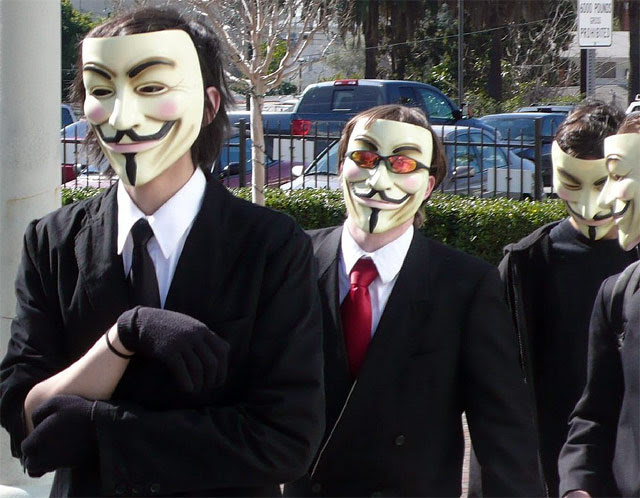 I don't want to sound like your dad but I am warning you.

You will face huge pressure to change your tactics and your strategy.

I am writing in response to a recent open letter entitled 'Right Fight, Wrong Action' appealing to you to stand down and reject illegal tactics such as hacking (see below)

However it is necessary in an unjust world to break unjust laws.

Morality can be debated. However we don't have morality we have a mafia society.

In modern capitalism you might even argue, as I do, that the elites are merely bearers of structural capitalist relations.


The basics are clear, elites have more and more wealth and income, the economy under capitalism is based on wrecking our planet and stealing resources.


This must be fought and yes the inspiration of peer-to-peer, wiki, FOSS, commons shows we can have a different system (I would call it ecosocialism but labels are less important than focussed action). Elinor Ostrom, while she may not have developed an analysis of capitalism, has done splendid work to show that commons is possible.

So I was dismayed but not surprised to find the call below asking you to rein in....unjust laws can and indeed must be broken, despite what the writer below implies figures like Gandhi (I am not going to get into his many strengths and weaknesses here) broke the law to advocate justice.

Do what is right, do what is just, do what is effective.....don't listen to those telling you to tolerate the wrong and unjust and the ineffective.

There is much else I could say from avoiding conspiracy theory analysis especially those who would use it to demonise or the importance of learning more about the economy or examining how previous resistance movements have won or lost, the importance of linking up with working class and indigenous movements, etc.


However remember also.....we are many, they are few!


When you engage in illegal activities, you lose a lot of your most powerful defenders and supporters. The rule of law creates a baseline civility necessary for progress. Cross that line one too many times and you risk being marginalized simply as a common criminal. More important, you can't do any good if you're sitting in a prison cell caged like an animal -- and this is likely to happen to at least a few members of your group. When the headlines are gone, some of you will probably be sitting behind bars with only a very few people to ever visit. You've caught the public attention you wanted. That attention, and the embarrassment it has caused to powerful entities, will likely also undo Anonymous.

There is more power in lawful and peaceful disagreement. Think of the figures that will go down in history as strongest and most influential resistance movement leaders we know: Gandhi, Martin Luther King, Jr., and more.

Many of the members of your group appear to be bright and well meaning, but the ends do not justify the means. Illegality is illegality no matter why it is committed. Instead I hope that you'll take your knowledge and talents and focus them on positive and legal avenues. I can imagine all the energy and passion put toward helping others, without risk of imprisonment.

great way to generate traffic! pick a popular subject and write a negative review....globalist love it when you post negative blogs about an un defeat-able enemy!

That warning was retarded. Anonymous only needs to concern itself with the dynamics. There will be laws broken. There may even be negotiations. There will be no ransom or direct coercion.

Most other cases you can without much backlash.