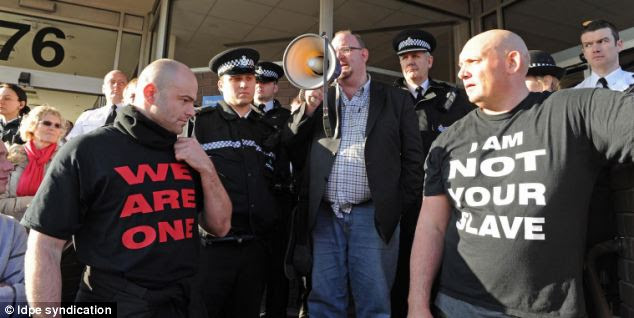 Intriguing and bizarre from Schnews:


Now SchNEWS has been hearing a fair bit about the whole 'Lawful
Rebellion' thing now for a year or two, picking up where 9/11
truth left off. It's a heady mix of the Magna Carta, contract
law and monarchical anarchism (Occassionally it makes some good points
about the relationship between state and individual.) But to be honest
we'd not realised quite how big it had got. On Monday 7th March,
around 600 protesters attempted to 'arrest' a judge at
Birkenhead County Court. They were there to support Roger Hayes,
chairman of the British Constitution Group (BCG), who was in court for
a bankruptcy hearing after not paying council tax.

Hayes attempted to prove that the enforced collection of council tax
by government is unlawful because no contract has been agreed between
the individual and the state. His argument is that he can represent
himself as a third party in court and that 'Roger Hayes'
is a corporation and must be treated as one in the eyes of the law.
This was apparently unsuccessful as he then 'asked if [the
judge] was serving under his oath of office' when Judge Michael
Peake didn't answer this, Hayes 'civilly arrested'
him.

The judge adjourned the case as he was bundled out of the room by
court officials while supporters of Mr Hayes attempted to block the
exits. Though the judge has so far escaped justice, members of BCG
have said that they 'know his name and where he works, we can
get back to him later.'

Six people (not including the judge) were arrested for assault police,
breach of the peace and obstruct police.

Roger Hayes is an ex-member of UKIP and was a candidate for the
Referendum Party, receiving 1,490 votes. Following on from these
successful forays into politics he got involved with the BCG. The
stated aim of the BCG is, amongst other things, to get at least
1,000,000 people to engage in 'lawful rebellion'. Although
they succeeded in getting a few hundred to defend their leader,
they've yet to achieve all out rebellion. Much of their rhetoric
has a lot going for it- 'end the bailout', 'we the
people need to take charge', attacks on the corporatisation of
Britain,but it is tinged with at best confused, at worst sinister, mix
of monarchism, nationalism and individualism.

In the words of their own declaration 'We, the British People
have a right to govern ourselves' good start, but apparently the
problem is that 'Her Majesty Queen Elizabeth II... no longer
governs us in accordance with our laws and customs, as was the
situation when she was elected by the people as our Sovereign and our
Head of State'- makes perfect sense to us.
at March 11, 2011

They were doing a newspaper a little while back, which some truthers, such as the Exhibition of the Universe people in Blackpool, were distributing.

As Schnews states, the politics seem to be a mixture of the good, the bad and possibly the ugly. But the numbers they got to turn out suggest this group deserves a closer look......