'It was a grand, exhilarating, and hopeful day' 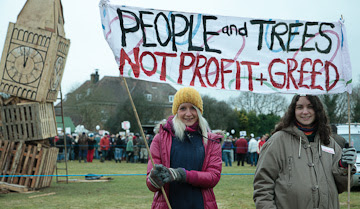 just got this, incidently I am speaking at a Worthing Forest Rally, 14 May, pic is not Sussex but gets the spirit of the thing.

Exactly 100 people enjoyed a 'grand day out' of celebration, discussion and forest rambling to mark the government's climb-down from its proposal for the total privatisation of the English Forestry Commission's estates, and to steel ourselves for a long year of campaigning against job and funding cuts and backtracking on the no-sales pledge by the government.

People came from Seaford, Eastbourne, Lewes and Hastings, as well as from Brighton, and a contingent from Red Rope, the socialist walking and climbing network, came down from London. Supporters from 38 Degrees and from Save Our Woods, the new on-line campaigning organisations, joined the event and filmed it !!

Tony stressed the way that the Forestry Commission managed their woodland 'multi-functionally' to provide a range of 'ecosystem services' - from supporting and enhancing wildlife in as naturalistic settings as possible, to access and recreation, and local climate amelioration, flood risk reduction and water resource management. He argued that the substantial size (one in fifty acres, nationally) and diversity of the public forest estate was necessary to deliver these services. The Forestry Commisson, he said, was very different nowadays from the past, when they had been forced to confine themselves to the simple planting of serried ranks of conifers.

Kate said that although the government now has no immediate plans to sell the estate, it may starve it of cash by severely reducing the Forestry Commission’s budget, which could put the management and protection of these wonderful woodlands at risk. She saw a great opportunity in the government's appointment of the new 'Independent Panel on Forestry Policy' (which reports in the autumn) for us to press for a statutory right of public access to ALL woodland, whether private or public, such as already exists for mountains, moors, heaths, downs, and commons under the CROW Act (Countryside and Rights of Way Act 2000). The new Panel's terms of reference oblige them to give consideration to just such public benefits.

Dave argued that the members of the government's new Independent Panel had a majority of representatives of organisations that had a conflict of interest with the Panel's independance because they represented landowning conservation NGO's or private landowning interests that stood to gain by 'cherry-picking' the Forestry Commission's estates. Not a single representative of the array of forest defence organisations or of the Forestry Commission's trade unions was on the Panel. The government's climb-down on privatisation was because of the huge grassroots campaign of opposition, he said, and the conservation NGO's had "not so much as lifted a finger to support our campaign", quoting Jonathan Porritt, the environmental campaigner.

After the rally we walked up through the Forest to its northern part, where a partnership of the Sussex Wildlife Trust and the Forestry Commission is overseeing the creation of a large area of 'wood pasture' grazed by the Trust's white park cattle, to enhance the wildlife interest of the Forest.

Tony then led us to a high viewpoint on Fore Down, looking over Lullington Heath National Nature Reserve, where he explained the management and enhancement opportunities for Friston Forest and its neighbouring downland.