NHS plans profit can be made by cutting patient care. 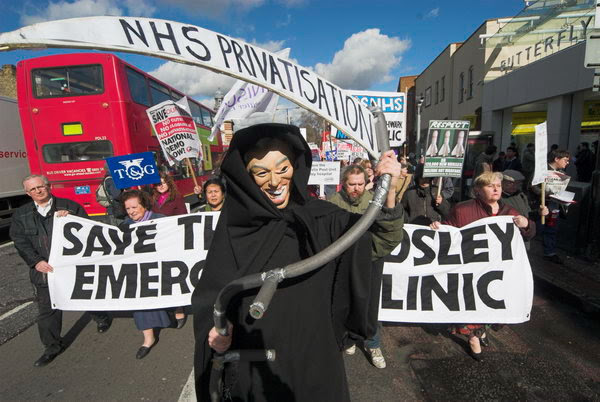 The real danger of NHS privatisation was laid bare today after plans emerged to set up a private company that would take control of GPs' commissioning budget.

Private health firm IHP has outlined proposals for a consortium's NHS commissioning budget to be handed over to a private company in which GPs would own a 20 per cent stake - leading to practices being partially floated on the stock market.

Under the Health and Social Care Bill, currently at committee stage in Parliament, GP consortiums will control £80 billion of NHS funds to commission to patients from 2013.

But IHP is in talks with three GP consortiums to set up a private company that would turn annual savings on patient spending into profits.

It aims to list the company on the stock market in three to five years.

Once set up the company would treat patients at 95 per cent of the cost of the NHS and pocket the savings - said to amount to £40 per patient.

The proposals exploit a loophole in Health Secretary Andrew Lansley's NHS reforms that allows a private company to seize control of a GP consortium's commissioning budget by claiming it is both a provider and purchaser of health care.

"People's health and well-being should not be equated to the daily fluctuations of the FTSE share index," he said.

The union called for the legislation to be tightened to close off this loophole and for regulator Monitor to be scrutinised closely by MPs.

A spokeswoman for the Department of Health said the commissioning budget must be used exclusively for patient care.