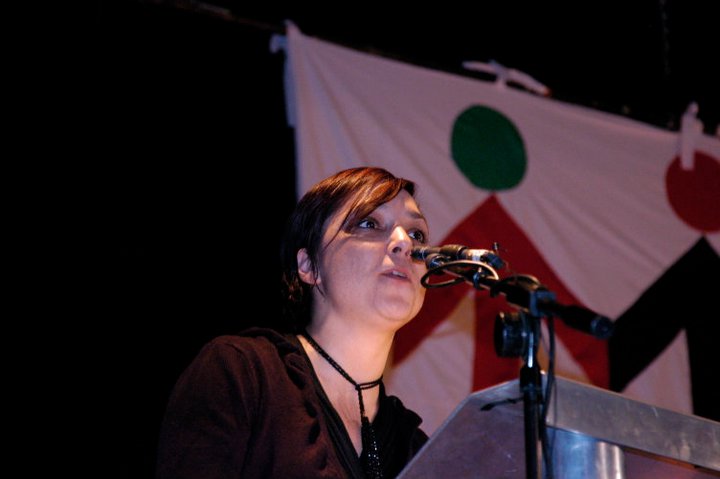 I am gutted, she has been such a briliant campaigner.

A big defeat for students.

Anyway I am sure she will do other important things.

So sad. I am sure those who believe students unions are all about water polo rather than political resistance will be happy.

However left candidates have won other posts as Alex notes:

Clare Solomon has, sadly, not been re-elected president of University of London Union (ULU). During her year in the post, Clare has played a leading and dynamic role in the student protest movement which emerged in opposition to higher tuition fees and drastic cuts to higher education funding.

Surely not the same who said:

"The view that Jews have been persecuted all throughout history is one that has been fabricated in the last 100 or so years to justify the persecution of Palestinians."

I don't know that this was a defeat for students. This was students voting. Many students support the protests, support activism but have been disturbed by a taint of antisemitism that certain people like Clare Solomon have brought to the table.

I don't think the FaceBook comments are all this is about. Polling on the violence in the student protest, which Clare saw as acceptable, show that of those that voted, the majority disagree with the violence. Additionally, it is annoying when you feel totally unrepresented in any way by ULU; it feels like marching protest and occupation are the only acceptable forms of resistance. A forum of debate on ideas seems to be lacking. Indeed, it looks like I'm campaigning on my own next week, trying an alternative to conventional protest. There is an feeling of resistance when trying to engage in other ways. I think this apparent backlash is a wake-up call, to think about diversifying tactics and being more inclusive, actually asking the student body what they want to do more of, rather than assume that marching is everyones idea of resistance. In an environment where you hold left values, but feel that if you don't toe party line you will be excluded, it can be very lonely, and that exclusion drives people out.

This is indeed troubling news. The question we should be asking is not, who will step in her place, but how can this inspiring student be even more of a leader now that she is to leave the ULU Board of Trustees.

I suspect that it's her stance on Palestinians and islamophobia which triggered the Ben-Grabiner-at-LSE-led campaign against Clare's bid.

Not that I'm particularly into horses, more thinking of Ben Samuel for GLA & the mayoral count on Saturday @ GPHQ: I am reminded of the great poet Ralph Waldo who said "Win as if you are used to it, lose as if you enjoyed it for a change".

Clare stood very much on a socialist and left platform despite, according to the Jewish newspapers, being expelled from the SWP.

The only green thing I can see about her work is that she had this testimonial from Ashok Kumar, himself a great campaigner.
"ULU was at the heart of this year's student uprising and Clare has been front and centre inspiration. Ashok Kumar, LSESU Education Officer

To be honest I suspect most students voting had long forgotten the incident, if they were ever aware of it in the first place. Of far more relevance are the student protests and the severe divide over tactics and Clare has been high profile in her support for one side.

Many will be happy, far far beyond those "who believe students unions are all about water polo" and that is a gross caricature of Vraj and his supporters.

I voted against Clare because she often said she represented all 100-odd thousand students of the University of London. In reality, most students of the constituent colleges of the UoL wouldn't know the UoL Union if they fell over it, and certainly wouldn't view Clare as talking on their behalf.

Her strange views about Jews had nothing to do with my vote. It was quite simply her arrogance to bring her politics into her role and to think she spoke for all students at the UoL (I recall at one point she began using the term 'My students').

Her 'strange' views about jews are more than enough for me not to vote for her.

I don't care where anyone says things like she did about Jews. The fact that it was on Facebook doesn't make it acceptable.

@Vote Green in the Assembly!

If you are referring to the campaign on facebook, it was administrated and created by 3 UCL students, including myself. Enough of your vacuous and callous Jew hatred.