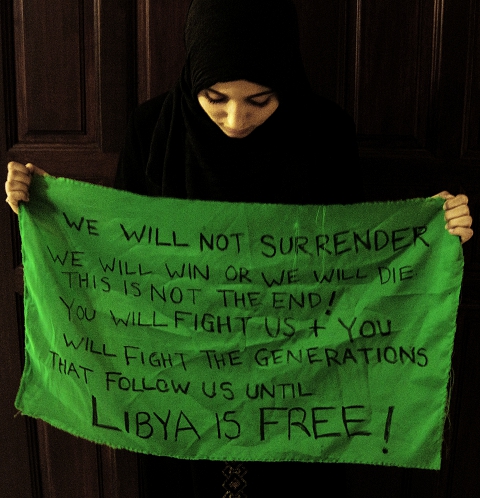 Just got this confirmation:

9:40 pm Mohamed, a doctor from Al Jalaa hospital in Benghazi, confirmed to Al Jazeera that members of the military had sided with the protesters.

We are still receiving serious injuries, I can confirm 13 deaths in our hospital. However, the good news is that people are cheering and celebrating outside after receiving news that the army is siding with the people ... but there is still a brigade that is against the demonstrators. For the past three days demonstrators have been shot at by this brigade, called Al-Sibyl brigade.

Armed to the teeth by countries like the US and UK, Libya is an oil dictatorship loved by the west.

Its all about oil but the people are fighting back.

Looks like the army are now joining the people, in at least some part of Libya

The army came out, ok, it was with tanks and they're telling us, seven people, protesters, that they're with them, and they're here to protect them and everything else. But we hear other things; in some other places of the city, the army's shooting people, and also I heard that they're taking over the airport and there's some airplanes arriving with more army corps from outside, from the other cities.

This is from Al-Jazeera, who very good links and coverage, here

Every time a mid-eastern dictator goes down, islamists will fill the power vacuum. The global jihad continues, and eliminating whoever stands in the way is a victory for islam’s designs on world domination. As evil as Ghadaffi was, he was pragmatic enough to want himself and his country to survive. To the islamists, unlimited chaos, death, and destruction in the service of the caliphate is the will of alah, hence desirable if the goals are ultimately achieved.

A good pro American dictator is what you want,

Islamism of the worst kind is what we have in Saudi Arabia but none of you trolls seem to worry about that.

I abhor the Saudi regime.

I would never go there or help them in any way possible.

Unlike Hugo, who was there last year! Ah, solidarity with the oppressed is a lovely thing... Maybe he wanted to see a beheading?