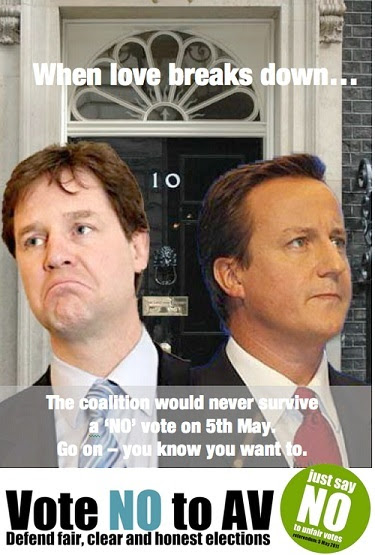 AV its a clusterfuck and could keep the Tories and neo-liberals in power for ever, please join the campaign against it. This is from Joseph Healy.


The suggestion by Andrew Grice in the Independent this morning that David Cameron might be planning to assist the Lib-Dems over electoral reform — just as he did in the Oldham East & Saddleworth by-election — changes the whole nature of the AV referendum debate. Many of those Labour MPs who have backed AV see it as an easy, costless and pretty empty gesture which can be spun as evidence that Labour is modern and its commitment to democracy paramount. They over-estimate the benefits, and overlook the massive risk of long-term Tory-led coalition. They don’t see it as real electoral reform; they don’t notice that it could actually severely undermine real democracy.

This all assumes that people will vote exactly the same way every year under AV, they won't. After a few elections, it will have made some gradual changes to the political spectrum leading to a little more plurality in some places, though probably a little less in others.

The only choice we have now is AV or FPTP. I'm nor sure if there is a 'minimum qualified turnout' to give abstaining any weight?

Especially since the Lib Dems completely snubbed Caroline Lucas' amendment that gave us one last hope for REAL reform. I reckon we won't see anything as progressive as her input in terms of 'fairer votes' for a generation.

BEWARE!! think carefully before linking up with the official NO2AV campaign, it's motives are sinister as are the majority of it's sponsors. An unholy alliance of the Tory right and Labour right.

As much as I support the NO2AV - YES2PR argument I'm surprised to see Joseph Healey and others on the Left endorsing it so specifically. If anything, the NO2AV - YES2PR supporters should have a distinct campaign, and focus on the long term not just what happens in May. It needs further discussion, I know there isn't much time left, and that a lot has since been said at Coalition of Resistance.

I came to the conclusion a couple of months ago (agonisingly!) that a Yes vote is the only way we can influence further reforms in future.

History has shown us this to be the case, one reform tends to lead to a greater progression in future. Look at how the right to vote has gradually been given to all, from class to gender to age - and only now possibly for those in prison. Consider gay rights, progression from full discrimination in 1969 to the age of consent lowering from 21 to 18 in the 90's and 18 to 16 in 2001 to Civil Partnerships in 2004, and it looks like Equal Marriage in 2013.

No reform is a dead end.

The proposed AV legislation appears to be the preferential voting system we have in Australia. It's not a bad idea, first past the post is generally considered a pretty undemocratic system here; but proportional representation would be light-years ahead (perhaps with preferential voting included?). Had we proportional representation in Australia, the last national election would have seen 10 or 11 Green MPs; we got one. Nuff said!