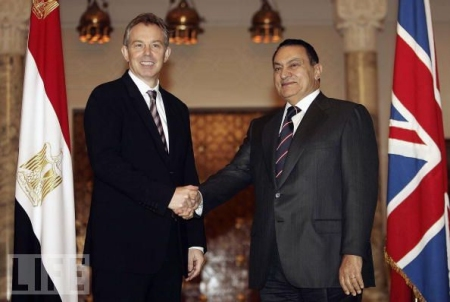 Well they kept the Labour Party in even after Tony Blair killed 100,000s in Iraq, guess they are desperate but yes last week the Socialist International gave Hosni's Party the heave ho.

The National Democratic Party of Egypt became a member of the Socialist International in June 1989, at the XVIII Congress held in Stockholm.
This decision was based upon the desire of the Socialist International to build a partnership with your organisation in the search for peace and security in that region of the world, so crucial to global stability. The International, as a movement for peace, recognised in this decision the will of the NDP and its leadership to sincerely engage in this quest, as has indeed been evident over the last thirty years.

Along with this, the Socialist International wanted to encourage the development of multi-party democracy in Egypt by expanding relationships in that part of the world, as democracy is for our movement a fundamental pillar upon which to secure the rights and freedoms of our citizens and to achieve social and economic progress.

Our International certainly recognises that what we managed to do together in our common work to contribute to peace, particularly between Israelis and Palestinians, and to foster a new climate in the region conducive to the recognition of a two-state solution has had a positive and lasting impact.
On the other hand, the lack of developments in relation to democracy in Egypt has left us deeply troubled, notwithstanding the hopeful moments which had arisen during the 80s and led to membership of the NDP in the SI and then again in the mid- 2000s when a measure of important internal changes had taken place within the NDP.

The current massive calls being made today by the citizens of Egypt for freedoms and rights point to the dramatic failure of the Egyptian government to deliver to its people and to the failings of the NDP to live up to its promises. The use of violence, with scores dead and injured, is totally incompatible with the policies and principles of any social democratic party anywhere in the world.

Consequently, we consider that a party in government that does not listen, that does not move and that does not immediately initiate a process of meaningful change in these circumstances, cannot be a member of the Socialist International.

We are, as of today, ceasing the membership of the NDP, however we remain determined to cooperate with all the democrats in Egypt striving to achieve an open, democratic, inclusive and secular state.