Possibly the worst Green Party in the World! 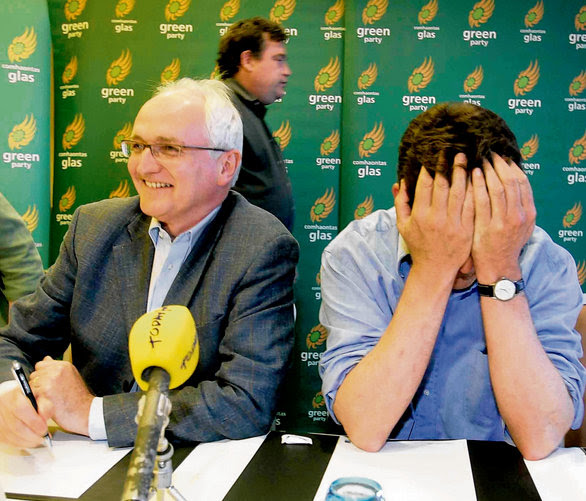 The Irish Green Party has provided a textbook example of how not to do green politics. Who would have thought a Green Party would cut bus services and support motorway-building through a heritage site? Who would have believed that a Green government elected partly because of its opposition to the Iraq war would allow US war planes to refuel in Ireland at Shannon?

The Irish Greens have had councillors, MEPs and members of the Irish parliament elected because of the country's system of proportional representation.

Ireland has two centre-right political parties, Fianna Fail and Fine Gael, which have often been linked to allegations of corruption involving property deals.

The Greens made their name as critics of Fianna Fail. In February 2007, Green leader Trevor Sargent told the Irish Times: "I do not see myself leading the party into coalition with Fianna Fail due to its culture of bad planning, corruption and bad standards."

However, after the May 2007 general election, Sargent resigned as leader and 80 per cent of party members voted to join a Fianna Fail government in coalition.

The results have been catastrophic.

In Mayo, local people believe that a gas pipeline and processing plant being built by Shell will create pollution and bring no benefit to the local community.

The Irish Green Party, which once strongly supported the Mayo protesters, has become silent since joining the government.

Makes me fear for what might happen when any of the British Greens get into a coalition. Hoping we are all as sensible as the Scottish Greens seem to be. Moth

I don't think there are plans for a coalition, Fianna Fail are rubbish.

Doesn't this (among other examples) demonstrate the folly of pursuing electoral politics in a context where there is a very weak oppositional/radical consciousness across the broader electorate?

It seems to me that socialists/
radicals should only seek office if when they do so there are sufficient social forces within the broader society that can be mobilised in support of their radical policy positions. If there are not then it is very likely they will be compelled to support and implement reactionary policies.

In the past it was assumed that socialists/radicals would only get elected if there was a significant social movement to support them.

Today, for a mix of reasons, they can get elected by an electoral base that is not part of a larger coherent movement willing and able to challenge formal political authority.